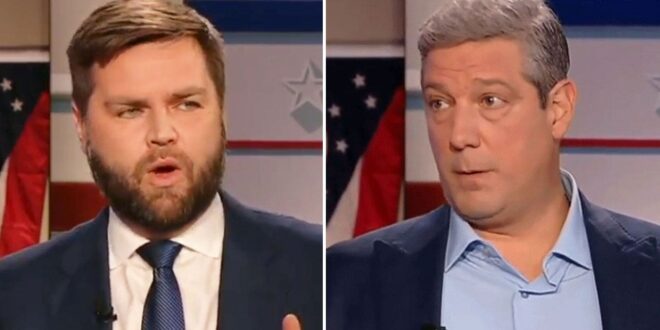 With one week to go until Election Day, an average of the latest public opinion polls in the Buckeye State indicates Vance holds a razor-thin edge over Ryan, who currently represents the Buckeye State’s 13th Congressional District.

On several occasions, Ryan attempted to portray himself as a moderate candidate in the race, distancing himself from national Democratic Party leaders like President Joe Biden and House Speaker Nancy Pelosi.

Asked about inflation and the current state of the economy, as well as the Inflation Reduction Act and whether it will impact an American’s current financial situation, Ryan said, “I think when it comes to inflation, we need a tax cut. We need to put money in people’s pockets if we’re going to weather the storm here.”

The Democrat also insisted that “crime is an issue” ahead of the state’s November 8 Senate election.

“I don’t care what anybody says about that,” he said. “We need more cops, we need better paid cops and we need to make sure that we invest into police training.”

Ryan defended prior comments he made regarding the elimination of cash bail and the release of “all the nonviolent criminals” from prison, insisting that his positions on the two issues are driven by his support for the legalization of marijuana.

“Well, what I’m talking about here is marijuana crimes,” Ryan said. “I think we need to legalize marijuana.”

Ryan, who said he would “never” vote to increase taxes on working class people, also defended funding for thousands of new IRS agents as part of the Inflation Reduction Act.

“It’s not an either/or… 40,000 IRS agents are going to retire in the next 10 years. This is over 10 years. We’re going to replace those people. But we also have a lot of Fortune 500 companies and a lot of really rich people who have teams of accountants, teams of lawyers, and they don’t pay any taxes,” Ryan said when asked about his vote in favor of the bill.

“I think if you should be able to build yourself and fly yourself into space, you should pay your fair share in taxes,” he added. “So we need enough agents to be able to go after these billionaires who are avoiding taxes at all cost.”

On the topic of abortion, Ryan avoided saying what limits he thought needed to be placed on the ability to have the procedure done.

TIM RYAN DISTANCES HIMSELF FROM DEM PARTY LEADERS, ADMITS ‘CRIME IS AN ISSUE’ AHEAD OF OHIO SENATE ELECTION

“I believe if it’s later in the term there should not be an abortion unless there is a medical emergency,” Ryan said when asked what his limits would be.

“At that point, you know, people are — they have a nursery, they have binkies, they have blankets. They have names picked out. They are ready to have a party. If it happens late in term, that’s tragedy, absolute tragedy,” he added.

Ryan went on to claim that Vance supports a national ban on abortion and reiterated his support for Roe v. Wade.

Vance was also asked about pressing issues that are currently driving the conversation in American politics, including the recent attack on Pelosi’s husband, Paul Pelosi.

Vance insisted the attack on Pelosi’s husband is part of a larger conversation about illegal immigration.

“I think the effort to turn this into a political issue actually is a real problem here, because Paul Pelosi was attacked by a person who’s an illegal alien in our country and should not have been here in the first place,” Vance said.

Vance dismissed that he had downplayed the attack on Paul Pelosi, and said he thought it was something that all people should condemn.

“My view very simply is that we need to deport violent illegal aliens,” Vance said.

Vance on the greatest threat to American democracy

Vance also said he believes the greatest threat to American democracy is big tech companies that are aligned with China.

“I happen to think the biggest threat to American democracy today is big technology companies in bed with the communist Chinese who are censoring information about American policy,” Vance said. ” And this is really, really important because, look, Facebook, Twitter, you know, all these companies are now the digital public square.”

The Republican was asked to explain his statements he made about the 2020 presidential election being “stolen.” He said he did not want to run away from that statement, but added that between allegations that states did not their own election procedures, and the influence of big technology companies, he did think there was unfairness in the 2020 election.

Among the issues Vance placed emphasis on during his appearance at the town hall event was the opioid crisis, insisting that the border and drug crises could be addressed by finishing the wall and classifying drug cartels as terrorist organizations.

“I have had such a good time campaigning across the state of Ohio, but one of the really sad parts is that every single stop that we make I meet somebody who has lost a son, a grandson, a daughter, a granddaughter to the opioid problem,” he said. “We really got to get control of this.”

Vance said he believes “drug cartels are actually destabilizing Mexico” and that America’s Mexican allies “would love it if we declared the cartels a terrorist organization and actually brought the full force of American law against them.”

Ryan and Vance, who are both running to succeed retiring GOP Sen. Rob Portman, will go head-to-head in next week’s Senate election in Ohio.

Previous US military conducting onsite inspections of weapons provided to Ukraine
Next Tim Ryan distances himself from Dem party leaders, admits ‘crime is an issue’ ahead of Ohio Senate election