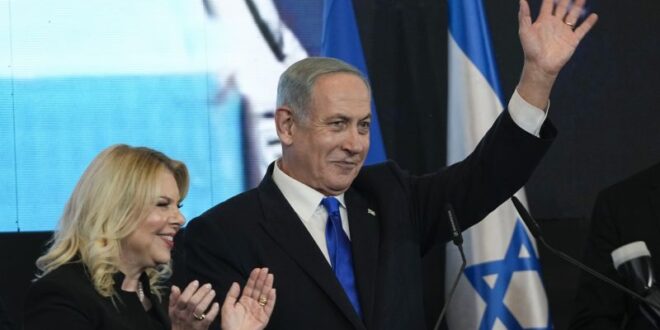 Benjamin Netanyahu appears to be on course for a bigger victory in Israel’s fifth election in less than four years than initial exit polls suggested, all three of the country’s main television channels projected Wednesday morning.

His Likud party and its natural allies are currently projected to win 65 seats in the 120-seat Knesset, with 86% of the votes counted as of Wednesday afternoon Israel time.

A coalition of Netanyahu’s Likud, the Jewish nationalist Religious Zionism/Jewish Power bloc, Shas and United Torah Judaism would, on paper, be the most right-wing government in Israel’s history.

Current Prime Minister Yair Lapid and his allies appear to be on track to win 50 seats. An Arab alliance called Hadash-Taal looks is projected to win five seats, and is unlikely to support either Netanyahu or Lapid to lead the country.

Voter turnout was 71.3%, the Central Election Committee said. That’s the highest since 2015, according to the committee – higher than any of the four previous elections, 2019 to 2021, which produced stalemates or short-lived governments.

Since initial exit polls on Tuesday night, a left-wing party called Meretz appears to have fallen below the 3.25% threshold to win any seats in the Knesset. If the party manages to win enough of the national vote to get seated in parliament, the final results could change.

These are not final results; one in five votes nationwide remain to be counted. Final results could come as soon as later Wednesday, but could take until Thursday to arrive.

A Netanyahu return to the head of government would spell fundamental shifts to Israeli society. It would include the newly ascendant Jewish nationalist Religious Zionism/Jewish Power alliance, whose leaders include Itamar Ben Gvir, once convicted for inciting racism and supporting terrorism.

And Netanyahu allies have talked about making changes to the judicial system. That could put an end to Netanyahu’s own corruption trial, where he has pleaded not guilty.

Netanyahu himself had been one of the main issues not only in Tuesday’s election but in the four that preceded it, with voters – and politicians – splitting into camps based on whether they wanted the man universally known as Bibi in power or not.

Part of the difficulty in building a stable government over the past four elections has been that even some political parties that agreed with Netanyahu on the issues refused to work with him for personal or political reasons of their own.

Getting the official results is going to take some time – they could be ready as soon as Wednesday, but it might be Thursday before the final makeup of Israel’s 25th Knesset is clear.

That’s partly because parties need to win at least 3.25% of the total vote in order to get any seats in the Knesset at all, a threshold established in an effort to make coalition building easier by keeping very small parties out of the legislature.

To determine how many seats each party gets, election officials first need to determine which parties crossed the threshold. Then they can work out how many votes it takes to win a single Knesset seat, and dole out seats to the parties based on the number of votes they got..