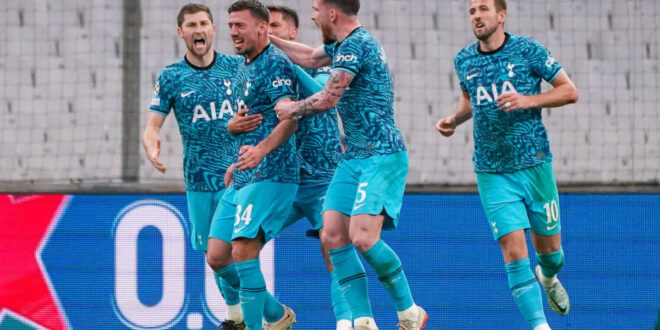 In one sense, it was just another Tottenham performance. It played poorly in the first half, improved in the second and ended up with the result it needed. It may not have been convincing at the Vélodrome vs. Marseille on Tuesday, but a come-from-behind, 2–1 win at the death took it through to the last 16 of the Champions League as a group winner. And in a season that keeps threatening to fall apart, that is no meager achievement.

But it’s still very hard to work out what it all means. Are Spurs actually any good? We’ll probably have to come back to that after the World Cup. Tottenham’s season has been oddly stop-start. The signings of Richarlison, Yves Bissouma and Ivan Perišić, added to the upturn in form toward the end of last season, had brought optimism that there could be, if not a serious title challenge, then at least comfortable qualification for the Champions League and perhaps a run deep in the competition.

But domestic defeats to Arsenal, Manchester United and Newcastle have exposed the limitations of the squad. When Dejan Kulesevski is not there, Spurs find it difficult to link the front and back of the team, while nobody has impressed consistently at wingback. At the same time, Antonio Conte’s football seems to have become increasingly reactive; even when Spurs have been winning, they have rarely been impressive.

Yet they are still third in the league. If they can rediscover their cohesion, they are well-placed. There is a theory Conte has prepared fitness training to peak in February. Others at roughly Tottenham’s level in the Premier League have also had problems. But the Champions League, which might have brought relief, has brought only more frustration, further evidence of the lack of balance and conviction about the squad.

Conte’s record in the Champions League, certainly by comparison with his other achievements, is poor. He took Juventus to the quarterfinal in 2012-13, but only one of his other four Champions League campaigns before this season had brought progress beyond the group stage. As ever, it’s possible to point to individual excuses, reasons why things have gone awry, but the overall picture is not good.

This season the problem has been clear: not enough goals in the first half. Only in the home game against Eintracht Frankfurt did Tottenham score before halftime. Too often it has been reliant on late rallies such as the one produced against Sporting last week, when Harry Kane had what had appeared to be a late winner ruled out for offside. Conte’s protests against that decision earned him a red card and meant he was confined to the stands for Tuesday’s game in Marseille.

Once again, Spurs simply couldn’t get going in the first half. Marseille dominated the ball and, with Kane and Son Heung-min isolated, there were long spells when Spurs simply couldn’t get out of their own half. A bad situation got even worse when Son was forced off after 29 minutes having taken a shoulder to the head from Chancel Mbemba. Eventually the pressure became intolerable, and, after Hugo Lloris had made saves from Alexis Sanchez and Jordan Veretout, Marseille took the lead in first-half injury time with a back-post Mbemba header from a corner.

But as so often this season, Spurs improved significantly after the break. Emerson Royal came on for Ryan Sessegnon, and Tottenham, with Kane and Rodrigo Bentancur to the fore, began to take a few more risks and progress higher up the pitch. There had been a couple of half-chances when Kane was fouled by Mateo Guendouzi wide on the left nine minutes into the second half. Perišić whipped in a perfect cross, and the improbable figure of Clement Lenglet twisted to head in his first goal since December 2020.

As Marseille was forced to try to force matters, Tottenham looked increasingly dangerous on the break, which drew the inevitable question of why Spurs have always to wait until they are behind before beginning to compete. Pierre-Emile Højbjerg smacked a late shot against the bar that would have sealed Tottenham’s progress but Sead Kolašinac then, with three minutes remaining, almost inconceivably put a free header wide.

In the end, Tottenham did win it, with Kane releasing Højbjerg to slam in a spectacular finish in the final seconds, as Marseille committed everything forward. That not just confirmed a place in the knockout stage, but it also meant Spurs leapfrogged Eintracht Frankfurt, which had also come from behind to beat Sporting, to top the group and secure a notionally easier tie in the last 16. (It also, dishearteningly for its French opponent, knocked Marseille out of Europe altogether.) There is room for plenty of improvement, but progress is progress.

Previous Marseille 1-2 Tottenham: Spurs win Champions League group after last-gasp goal sinks Marseille
Next Microsoft makes it easier to use pictures from your Android phone in Word or PowerPoint