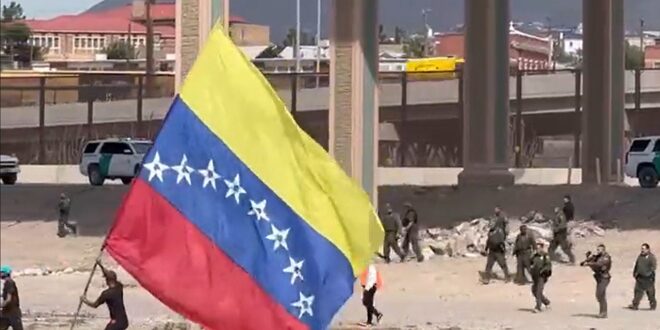 A massive group of illegal migrants on Monday crossed into the U.S. waving a large Venezuelan flag and, according to Customs and Border Protection (CBP), attacked Border Patrol agents – before being pushed back into the river as agents used crowd control measures.

The shocking incident, partially caught on video, saw a group of Venezuelan migrants crossing illegally into El Paso, Texas, as they waved the enormous flag. Agents can then be seen pushing migrants back into the river while firing pepper balls near them as crowd control.

In a statement, CBP said a group of Venezuelans had attempted to illegally enter the U.S. while protesting along the Rio Grande’s international boundary.

The agency said one of the protesters had assaulted an agent with a flagpole, while another had thrown a rock at agents, injuring one in the process. That in turn led Border Patrol to initiate crowd control measures.

“These measures included the use of the authorized less-lethal force pepperball launching system,” the statement said. “The crowd then dispersed and returned to Mexico.”

The agency said that its Office of Professional Responsibility (OPR) will review the incident.

The chaotic incident comes as the migrant crisis, which has roiled the southern border since early 2021, continues to see streams of large groups of migrants cross into the U.S. illegally. On Tuesday morning a group of 300 mostly single adults crossed illegally into Normandy, Texas.

In just the Del Rio Sector alone, Border Patrol reports more than 50 large groups of more than 100 migrants since the beginning of October.

Republicans have laid the blame for the crisis at the feet of the Biden administration, saying that its policies of rolling back Trump-era border security and enforcement have only served to draw more migrants to the southern border – with many of them being released into the U.S.

Republican governors have caused outrage from Democratic states by bussing and even flying them to liberal “sanctuary” jurisdictions like New York City, Washington D.C., Chicago and Martha’s Vineyard. The governors say it has been done to relieve overwhelmed border communities and to bring the crisis home to those areas that describe themselves as welcoming to illegal immigrants.

The Biden administration has taken an approach that has sought to target “root causes” of the crisis like poverty and violence in Central America. It has also emphasized the importance of cooperation with Western Hemisphere countries and recently announced a new cooperative operation with Mexico that sees more resources and checkpoints set up.

TENS OF THOUSANDS OF MIGRANTS HAVE CASES THROWN OUT OF IMMIGRATION COURT, AS DOCS NOT FILED

Controversially, it has also expanded Title 42 expulsions to include Venezuelan nationals – who were previously predominantly being released into the U.S. Now, they are being sent back to Mexico, which is bussing them deeper into the Mexican interior and giving migrants 15 days to get a visa or leave the country.

There were more than 227,000 migrant encounters in September, taking the total number for FY2022 to more than 2.3 million – a new record high. The administration says it has seen a decrease in the number of Venezuelan crossings in the immediate weeks after the new enforcement operation was put into place.

Meanwhile, Texas authorities have been involved in a number of car chases involving smugglers and illegal immigrants. In Kinney County, the local sheriff’s department pulled over a speeding vehicle with paper plates, finding eight illegal migrants being smuggled inside.

Video obtained by Fox from Kennedy County showed troopers from Texas’ Department of Public Service chasing a group of migrants after they bailed out of a vehicle following a human smuggling pursuit.

Bill Melugin currently serves as a national correspondent for FOX News Channel based out of the Los Angeles bureau.