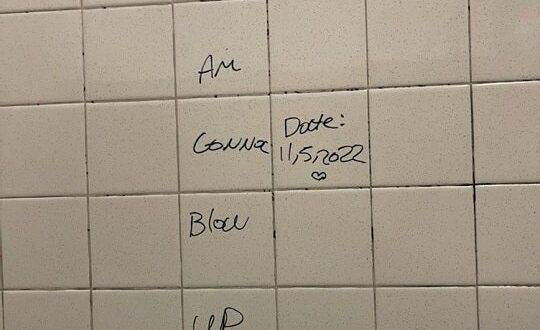 Florida girl, 13, arrested after posting threat to blow up school because she was ‘bored,’ cops say

A 13-year-old Florida girl threatened to blow up a middle school in a message written on a restroom wall because she was “bored,” police said.

The girl was arrested and charged with second-degree written threats to kill, injured or conduct act of terrorism, the Haines City Police Department said over the weekend.

“We take every threat to our schools seriously,” Haines City Police Chief Greg Goreck said in a statement. “The safety of our students is vital and we will continue to send the message to everyone that there is no such thing as a harmless prank when it comes to making threats against our children.”

A Florida middle school girl allegedly wrote a threat on a restroom wall because she was “bored,” authorities said.
(Haines City Police Department)

The message inside the female restroom at Shelley S. Boone Middle School read: “I am gonna blow up this school!!!” as well as “Date: 11,5,2022” with a small heart underneath it.

A department school resource officer was notified of the message and the school was checked for any potential threats or devices. None were found.

“During the course of the investigation, a 13-year-old suspect was identified, and admitted to writing the message because she ‘was bored,’” the police department said.

The girl’s mother allowed authorities to check her home. No weapons were found.

Polk County Schools Superintendent Frederick Heid thanks law enforcement for its response to the incident.

“We encourage parents to reinforce with their children that they should never make threatening statements. We must take any potential threat seriously,” he said.