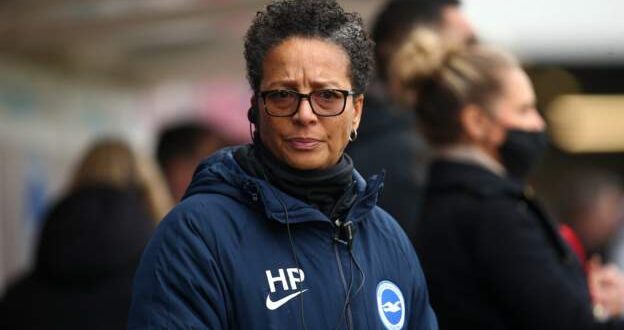 Brighton boss Hope Powell has stepped down as manager of the Women’s Super League team with immediate effect.

Brighton lost 8-0 at home to Tottenham on Sunday and have won just one of their five games this season.

Powell, who joined the club in July 2017, said: “I feel now is the right time to step aside and allow a new coach to take the team forward.”

“We’ve had a very challenging start to the new season with many changes to our squad and results not going as we had all hoped,” added Powell in a statement released by the clubexternal-link.

“Sunday’s heavy loss at home to Tottenham was particularly disappointing,”

Brighton are 11th in the WSL with three points – the only thing separating them and bottom-side Leicester – having lost four of their five matches. They have also conceded 19 goals this season, the most of any side in the league.

Powell is a hugely experienced coach and has overseen development at Brighton both on and off the pitch during her time at the club.

However, after investment in facilities and raised expectations in recent seasons, they have struggled for consistency in performances.

It is understood Powell was frustrated by the club’s recruitment this summer as they missed out on several targets in the transfer window, while a number of key players left Brighton.

But they have had a poor start to the WSL season and there was a general feeling that standards and performances had stagnated.

Their 8-0 home loss to Tottenham on Sunday was particularly disappointing and it is believed there were concerns over the club’s direction under Powell.

In terms of what happens next, there is expected to be plenty of interest in the vacancy.

Former Everton manager Willie Kirk – now director of Women’s and Girl’s Football at Leicester City – could be a candidate, while ex-Netherlands coach Mark Parsons would be a strong applicant should he show interest.