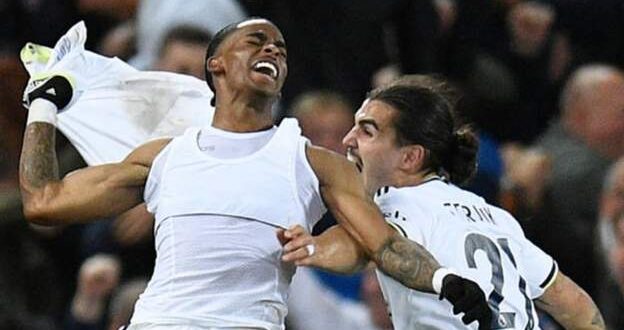 Just a couple of days ago, Leeds boss Jesse Marsch was complaining about how sick he was of losing after his side had dropped into the relegation zone following four successive defeats.

However, just hours on from making that comment he was celebrating arguably one of the most famous wins of his career as Leeds claimed a dramatic 2-1 victory at Anfield to move out of the bottom three.

“It was necessary to stop the bleeding,” said Marsch afterwards. “The guys are happy, there is music in the dressing room. We have to use this.

“Last week, against Fulham we were more waiting to lose than pushing to win and I think the best part was you saw a real resolve at 1-1 in this game.

“[Goalkeeper] Illan Meslier needed to make some big saves but the mentality to stay in the match and see if we could find a way to get three points was really strong.”

After guiding Leeds to Premier League survival on the last day of last season, Marsch was well backed in the summer to put together a side capable of pushing on.

They started the campaign brightly with two wins in their first three games – including a victory against Chelsea – but the drop in form after that has been alarming.

The recent run of defeats meant the pressure had been mounting on Marsch but, in fairness, Leeds have not always got the results their performances have warranted.

Before the trip to Anfield they ranked second for expected goals away from home and first for the most tackles, and all that came together on Saturday night as they took their chances as well as rarely letting a Liverpool player in possession have time on the ball.

“I am just happy for our team,” Marsch said. “I believe in them. I have told them that often. I have challenged them to get better, to stay strong and unified and they have done that.

“If you are a real leader the focus is on your people and this was an important time for our people.

“We played one of the best teams in the world. To come away with three points is a big moment for all us.”

While pressure may have been mounting externally, Marsch is adamant he never lost the belief of his players.

Leeds have had injuries to key players to contend with, meaning the American coach has had to put his faith in young players this season.

But those who have come in – including match-winner Crysencio Summerville – have repaid their manager’s faith in abundance.

“We have a really good young core,” Marsch added. “There is a group of 18-21 that is really strong, especially in attacking positions.

“The balance in our group is great. We should have never been in this situation. We have been playing well just not getting points.

“This is the best present I can get from anything,” added Summerville, whose goal came a day before his 21st birthday. “Words can’t describe my feelings right now.

“We have to believe that in every game it can happen. This is an early birthday present so I’m happy.”

The key now for Leeds is to ensure this is not a one-off, but that is easier said than done with third-placed Tottenham and leaders Manchester City two of their next three opponents in the Premier League.

They will likely look to approach those games as they had this one, but what – if anything – had changed in the build-up to this fixture?

“I am not superstitious at all, but I changed everything this week and now I can’t recall what worked for next week!” Marsch added.

If the Leeds boss can pin down exactly what was done differently to help engineer this win against Liverpool, then it won’t be long before they are looking up the table, rather than down.