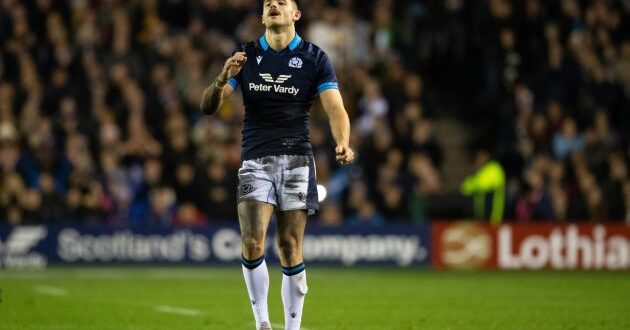 Blair Kinghorn after missing the kick to win it (Getty Images)

It was a tale of two kicks for Scotland ten Blair Kinghorn as he created a superb score to wrest the lead from the Wallabies but missed a kick to win it at the death. Australia won the match 16-15.

Fly-halves are meant to have an array of kicking talents, but this was another level of footballing skill on the deck as he created a superb score against the Wallabies from loose ball.

Check out he kick ahead and then the more deft follow-up nudge – at full tilt – before going over to score.

Kinghorn also added a penalty to extend the Scottish lead but the boot of Bernard Foley and a powerful James Slipper score pulled the Australians ahead once again.

Scotland’s discipline was poor all match but they had a late chance, working their way into Wallabies territory when replacement prop Taniela Tupou clawed for a ball when he wasn’t supporting his own weight and the Scots were given a shot at goal.

The ball drifted wide from the boot of Kinghorn, though.

Scotland will be kicking themselves for the opportunity missed and as well as falling foul of the referee Luke Pearce, shots at goal spurned and sent wide will be a big topic of discussion.

In the first half Scotland spurned a shot at goal to kick a penalty to the corner – to no avail. It would have increased their lead had they got the three, after Ollie Smith (starting at home for the first time ever, in only his second Test) danced through the Aussie defence after super slick hands from Sione Tuipulotu and Kinghorn.

But Kinghorn missed the conversion and a Bernard Foley three-pointer just before the break meant Australia went in leading 6-5 at the half.

And for all the kicks to touch, could Scotland have gone for the three-point shots at goal themselves more often? Australia took their chances when they could and despite errors aplenty from both sides, Australia have earnt some much needed momentum as they tick off game one of a five-match tour.

Previous Biden says Fetterman is ‘my kind of guy,’ who ‘just keeps getting better and better’
Next Obama campaign blitz in full swing as Biden backs off days before midterms: ‘They don’t want him’