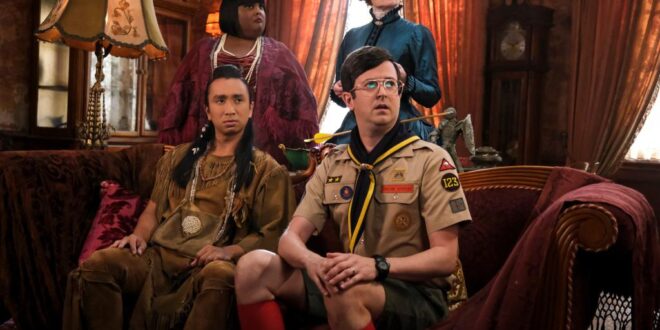 The cast of ‘Ghosts’ reveals their favorite Halloween costumes

Thursday night’s episode of “Ghosts” (8:30 p.m. on CBS) revolves around a last-minute séance at Sam and Jay’s Halloween party — with some unexpected ramifications (but of course).

To get into the spirit, The Post asked the stars of one of TV’s most popular sitcoms to reveal their favorite Halloween costumes … when they were kids. And, as you might expect from this wacky crew, there are some, well, interesting answers.

Here, without further ado, are their memories of dressing up and going trick-or-treating in days gone by.

Rose McIver (Samantha): “My favorite Halloween costume as a kid was a witch. ‘The Witches’ by Roald Dahl was the scariest book I’d ever read and the scariest movie I’d ever seen.”

Devan Chandler Long (Thorfinn): “Alf. I was Alf for three straight years (ages 4 to 7). What’s not to love about a furry alien with a surfer haircut that eats cats?”

Richie Moriarty (Pete): “I dressed as a nun one year when I was in elementary school and I truly have no idea why. My mom made the costume for me and I remember being very excited to wear the habit. My friends were mostly confused.”

Rebecca Wisocky (Hetty): “I did Bride of Frankenstein a couple of times. Put a long balloon on my head and wrapped my hair around it. I was a pretty silly 5-year-old Groucho Marx once, too.”

Brandon Scott Jones (Isaac): “My mom made me an exact replica of Kevin Costner’s Robin Hood (from ‘Robin Hood Prince of Thieves’) down to the rhinestones. We both loved that movie. I remember how much work she put into it and how proud she was of it. It’s my favorite not only because it legit-ruled for a 7-year-old but it was somethinghshe made and loved.”

Danielle Pinnock (Alberta): “Sadly, I never got the chance to dress up for Halloween because my family was religious. But my dream was always to dress up as Ursula [from ‘The Little Mermaid]! Maybe I’ll do it this year.”

Asher Grodman (Trevor): “Batman, because he’s the best! Those Michael Keaton films were everything to me as a kid. But does it count as a Halloween costume if I wore it year-round?”

Román Zaragoza (Sasappis): “My favorite Halloween costume as a kid is a tie between being Bruce Lee or Iron Man. I had the haircut, the outfit, and the martial arts moves to make my Bruce Lee costume epic. And my Iron Man costume was a last-minute plan where I just wore a white button-down shirt and slacks while holding an iron. I was equally proud of that costume.”

Sheila Carrasco (Flower): “My favorite costume was in high school, when I went as the College student in ‘Raiders of the Lost Ark’ who wrote ‘Love You’ on her eyelids. I loooooved Indiana Jones. Still do!”

Previous Samsung privacy-protecting Maintenance Mode is coming to Galaxy S22s worldwide
Next ‘We’re divorced to each other, not from each other’