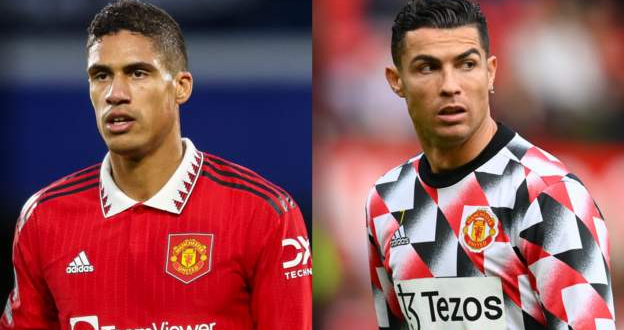 Manchester United: Raphael Varane out until World Cup, Cristiano Ronaldo back in squad for Europa League

France centre-back Raphael Varane will be out of action until the World Cup, while Cristiano Ronaldo returns to the squad for Manchester United’s Europa League game against Sheriff Tiraspol.

“Varane isn’t in the squad. He will be out until the World Cup,” United boss Erik ten Hag confirmed.

Asked whether Varane would be available for the World Cup, which gets underway in Qatar on 20 November, Ten Hag said: “We have to see how he develops, how his rehab will develop.”

The 29-year-old, who fell awkwardly while trying to challenge Pierre-Emerick Aubameyang, has 87 caps for France.

Ronaldo returns for Thursday’s game having been left out of Saturday’s squad for refusing to come on as a substitute and walking down the tunnel in the 89th minute during United’s 2-0 win against Spurs.

The Portugal forward, 37, later apologised for the incident, saying “the heat of the moment” got to him.

Ten Hag said: “I think we said everything and answered all the questions. He was out for one game and now he is back.”

Meanwhile, the Football Association has charged United with failing to control their players during the draw against Chelsea.

United players reacted angrily to referee Stuart Attwell’s decision to award a penalty when Scott McTominay pulled down Armando Broja in the box.

“Manchester United FC allegedly failed to ensure that its players conducted themselves in an orderly fashion in the 84th minute,” an FA statement read.

It is the second time the club have faced an FA charge this season after players surrounded referee Craig Pawson after he disallowed a Ronaldo goal against Newcastle earlier this month.