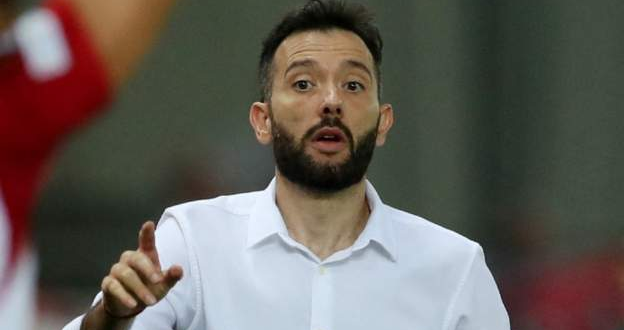 The 39-year-old Spaniard, who succeeds Steve Bruce at The Hawthorns, has been without a club since leaving Greek side Olympiakos in September.

Corberan resigned as Huddersfield boss in July, having guided them to last season’s play-off final.

He joined Olympiakos on 1 August but was sacked 49 days later.

“Carlos was in our thoughts from the very beginning of the recruitment process and our admiration of his qualities only grew on meeting him,” said chief executive Ron Gourlay.

“He is a confident, enthusiastic and detailed coach, who is as determined as I am to bring success to The Hawthorns.

“We share a belief that performances and results will improve under his guidance, and that significant time remains in the season for us to mount a serious assault on the Championship league table.”

Albion are 23rd in the Championship after winning just twice in 16 league games this season.

The club were bottom of the second tier in August 2000 after losing their opening three games before recovering to finish sixth.

But, in terms of the league table at a later stage of a campaign, their current position is the lowest the Baggies have been since a run of 11 straight defeats from October to Boxing Day under Alan Buckley in the 1995-96 season left them floundering in 23rd.

He joined Leeds United in 2017 and became a member of the backroom team of Marcelo Biesla, who arrived a year later, as they pipped Albion to the Championship title in 2020.

Corberan is Albion’s ninth boss in just over six years, since Chinese businessman Lai Guochuan took over the club in August 2016, and will take charge of training on Wednesday.

Corberan has yet to finalise his backroom team, but coaches James Morrison and Gary Walsh will be staying on at the club.

Albion have four games to play before the World Cup winter break, three of them at home.

They take on Sheffield United at The Hawthorns on Saturday and Blackpool three days later before travelling to QPR on 5 November.

Their final game next month is at home to Stoke City on 12 November.

‘Another radical change of direction’ – Analysis

The protracted 15-day wait for Steve Bruce’s successor nearly ran into a 16th as, barely half an hour before midnight on Tuesday, Carlos Corberan’s appointment was finally confirmed.

A Marcelo Bielsa disciple at Leeds, he then introduced his high-press style at Huddersfield, but it will need to be tempered somewhat to allow for some of the deficiencies in the Albion squad he’s inherited.

A similar approach, with largely the same group of players, came to grief under Valerien Ismael, so it will be intriguing to see how Corberan adapts, and how the players respond to another radical change in direction following on from Bruce.

The next big issue for Albion is to find a sporting and technical director who gives the club a proper fighting chance of moving forward.

Leigh Bromby was a key component in taking Huddersfield, under Corberan, to the verge of a return to the Premier League.

He might need to be the next piece in the jigsaw, to get the Albion fans believing that the club isn’t the shambles it’s been portrayed as in recent days, weeks and indeed months.