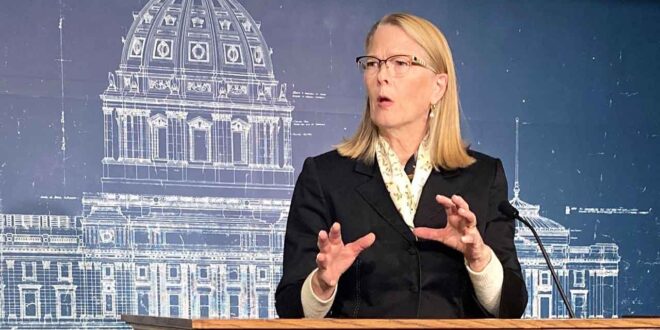 The Minnesota Legislature should mandate that the secretary of state’s office proofread every county’s ballots before they’re mailed out, Republican challenger Kim Crockett said Thursday as she decried ballot printing errors in four counties.

Crockett acknowledged that state law does not require the secretary of state’s office to review the ballots of each precinct across the state for accuracy — that’s long been the responsibility of Minnesota’s counties. But she suggested that Democratic incumbent Steve Simon should have caught the errors anyway, since counties are required to mail copies to his office.

“I think it’s a joint responsibility, certainly, between the secretary’s office and the counties, and this is something that I think the Legislature needs to step in and fix right away,” Crockett said at a news conference.

Crockett has been a harsh critic in the campaign of how Simon stresses ease-of-voting. She repeated her earlier statement that the 2020 election was “rigged” against President Donald Trump and called Simon’s moves to facilitate voting amid the pandemic “lawless and partisan.” She and other Republicans were especially upset with consent decrees that Simon entered into with groups seeking temporary changes, which courts approved. A divided federal appeals court later called the constitutionality of one of those measures into question, but the courts never reached a final determination on it.

While Trump’s false claims about widespread fraud have led many of his followers to doubt the integrity of the election process, multiple reviews, legal challenges and senior Trump administration officials have affirmed there was no fraud that would have changed the results.

Asked whether she distrusts Minnesota’s results from 2020, when President Joe Biden carried the state, Crockett replied, “I don’t think we’ll ever know precisely what happened.”

Republican Secretary of State candidate Kim Crockett speaks at a news conference at the State Capitol in St. Paul, Minnesota, on Oct. 20, 2022. Crockett said that the Minnesota Legislature should mandate the secretary of state’s office to proofread every county’s ballots before they’re mailed out.
(AP Photo/Steve Karnowski)

MINNEAPOLIS TO PAY MORE THAN $700,000 OVER POLICE BRUTALITY AT GEORGE FLOYD PROTESTS

Simon spokeswoman Cassondra Knudson said their office is always open to suggestions for improving election administration, but they would want to fully review any proposal and consult with local election officials before committing their support.

“We believe that local elections officials are the experts and trust them to do their work diligently,” Knudson added in an email. “In the recent ballot misprints, each issue was promptly identified and swift action was taken to ensure a remedy that satisfied both those on the ballot and voters.”

Voting in Minnesota began Sept. 23. The problem in Roseau and Kittson counties in northwestern Minnesota was that the same vendor neglected to include candidates’ party designations when it printed their ballots. The vendor also left off the designation “incumbent” next to sitting judicial candidates seeking re-election, although there are no contested judgeships on the ballot in those counties this year.

The Minnesota Supreme Court on Monday authorized the two counties to reprint the ballots. Residents there who have already voted, and want to change their minds, will be notified that they can cast fresh ballots. Otherwise, their votes will still count. Around 150 ballots were returned between the two counties before the errors surfaced, Minnesota Public Radio reported.

The two counties are sparsely populated but voted heavily for Donald Trump in the 2020 election.

A clerical error in Ramsey County, which led to absentee ballots bearing the name of a deceased GOP candidate in a St. Paul-area legislative district, was similarly resolved earlier this month. Authorization to fix another printing error, in Murray County of southwestern Minnesota, which involved the wrong district numbers for legislative races, is pending from the Supreme Court.