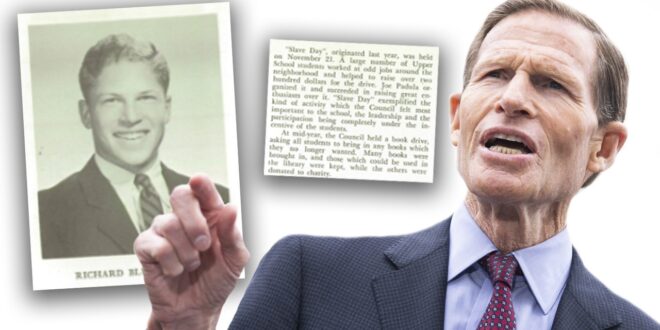 Sen. Richard Blumenthal, D-Conn., served as president of the student council at his high school when the group put on a “Slave Day” fundraising event, and he used a term now recognized as racist several times during one of his writings for the student newspaper at Harvard University.

According to images and documentation listed in the 1963 yearbook for Riverdale Country School, a private school located in the Bronx, Blumenthal served as president of the school’s student council and attempted to unify the school through a series of fundraising events that called for student participation.

One of the student council’s fundraising events, according to the yearbook, was the inaugural “Slave Day” on Nov. 21, 1962. Describing the event, the yearbook said a “large number of Upper School students worked at odd jobs around the neighborhood and helped to raise over two hundred dollars for the drive.”

The yearbook also noted that the “Slave Day” fundraiser “exemplified the kind of activity which the Council felt most important to the school, the leadership and the participation being completely under the incentive of the students.” 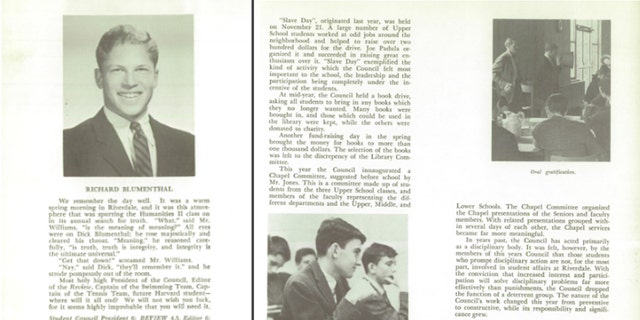 During his time as a writer for the newspaper, Blumenthal used a term that is now considered a racial slur at least seven times in a 1966 article for the newspaper titled “Summer School Project Set for Negro Students,” which described a program for African American students to study at Harvard, Yale, and Columbia University in preparation for graduate school.

“Twenty Negroes from Southern colleges will study here this summer under a new program organized jointly by Harvard, Yale, and Columbia,” Blumenthal wrote. “The purpose of the program, Dean Ford said last week, is to provide Negroes with the preparation they need to go on to graduate school, and to help them overcome problems of graduate school admission.”

In the 1960s, there was a debate over whether the word Blumenthal used was a racist term. According to Ferris State University, the word became “totally uncouth by the mid-1980s.” 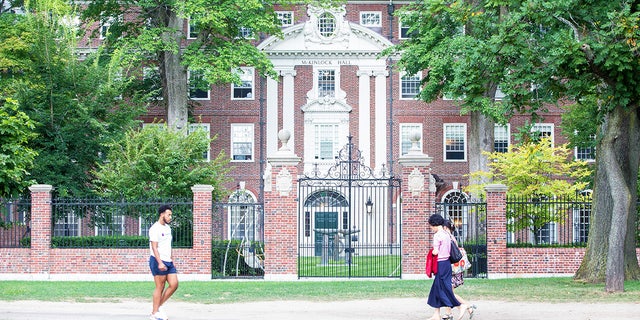 Blumenthal, who has represented Connecticut in the Senate since 2011 and is currently seeking another term in office, went on to use the term in the Harvard newspaper article to describe students and specific institutions that were majority Black.

Blumenthal and Levy, who is endorsed by former President Donald Trump, will face off in the state’s November 8 midterm election.

Fox News Digital reached out to Blumenthal’s office about the “Slave Day” event and his choice of words in the college writing, but did not receive a response.

Previous Watchdog barks at feds to boost health standards for working dogs
Next Six Chinese nationals charged with harassing, trying to coerce US resident to return to China