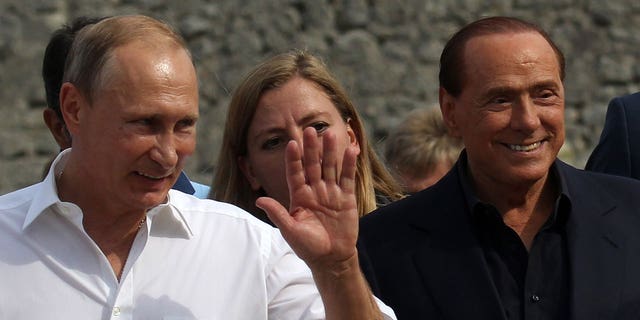 The European Union’s executive branch reminded Silvio Berlusconi on Wednesday that Russia “illegitimately” invaded Ukraine, after the former Italian premier was recorded boasting that he had recently reconnected with President Vladimir Putin and exchanged gifts of vodka, wine and “sweet” notes over his birthday.

The reaction from Brussels added to the upheaval Berlusconi’s comments had in Italy, where far-right leader Giorgia Meloni is putting together a proposed Cabinet before an expected mandate to form a government. Berlusconi’s center-right Forza Italia is gunning for the foreign ministry, at a time when Meloni and the EU have strongly backed Ukraine in Russia’s war.

The drama began when Italy’s LaPresse news agency published a recording of what it said were comments by Berlusconi, 86, to his lawmakers during a meeting this week in the lower Chamber of Deputies. The three-time premier and media mogul has a long-standing friendship with Putin and has previously seemingly justified Moscow’s invasion.

“I have reconnected with President Putin — a little, a lot,” Berlusconi was heard saying. “He sent me 20 bottles of vodka and a really sweet letter for my birthday. I responded with 20 bottles of Lambrusco (a sparkling Italian red wine) and a similarly sweet letter.” The occasion was Berlusconi’s 86th birthday on Sept. 29, four days after the right wing coalition won the most votes in Italy’s national election.

European Commission spokeswoman, Nabila Massrali, was asked to respond to the comments at Wednesday’s briefing, and recalled that EU member states are free to conduct bilateral contacts with Moscow, while respecting the EU policy to scale down such relations “to the necessary minimum.”

“The priority of these contacts should of course convey EU positions regarding the illegitimate invasion and aggression against Ukraine and call on Russian counterparts to stop it immediately and comply with international law,” she said.

Vodka imports from Russia are banned, but Massrali said she would inquire whether that ban also applies to gifts.

In the recording, Berlusconi also seemed to defend Moscow’s position in the war, relaying to his lawmakers that Russian officials have repeatedly said the West is at war with Russia “because we’re giving Ukraine weapons and financing.”

In previous comments, Berlusconi seemed to justify Russia’s invasion by saying Putin was forced into it by pro-Moscow separatists in the Donbas region of eastern Ukraine.

PALESTINIAN PRESIDENT, IN FRONT OF PUTIN, RULES OUT US AS MIDEAST PEACE MEDIATOR DURING SPEECH

“The troops were supposed to enter, reach Kyiv within a week, replace (Ukrainian President Volodymyr) Zelenskyy’s government with decent people and then leave,” Berlusconi told his favorite late-night talk show host on Sept. 22. Later he backtracked, saying his words had been “oversimplified.”

Berlusconi’s office tried to deny his comments about the birthday vodka. In a preliminary statement Tuesday, his office insisted that he hadn’t restarted relations with Putin and that Berlusconi “told an old story to lawmakers about a episode that occurred years ago.”

Hours later, after the audio was released, Forza Italia seemingly tried to distance itself from the comments. 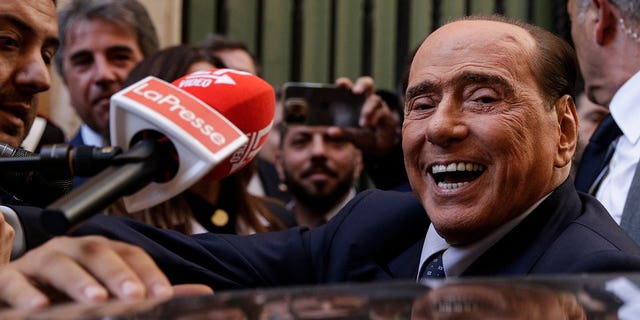 Silvio Berlusconi is mobbed by press as he leaves a reunion to decide the group leaders of at the Lower Chamber, in Rome, Tuesday, Oct.18, 2022.
(Cecilia Fabiano/LaPresse via AP)

“The position of Forza Italia and President Silvio Berlusconi with respect to the Ukrainian conflict and Russian responsibilities is known to all and is in line with the position of Europe and the United States, reaffirmed on several public occasions,” the party said in a statement. “There are no margins of ambiguity, nor have there ever been.”

Berlusconi’s latest comments are likely to complicate relations with Meloni, who is expected to be tapped to become Italy’s next premier. Meloni’s far-right credentials and past euroskeptic views have raised eyebrows in some European capitals, but she has staunchly supported NATO and Ukraine in the war.

Meloni’s Brothers of Italy party, which has its roots in a neo-fascist movement, didn’t respond publicly. But the opposition Democratic Party’s Enrico Letta, who has warned that Meloni’s right-wing coalition represents a threat to democracy, pounced. In a tweet, he recalled that another coalition member, the right-wing League, has questioned European Union sanctions against Russia because of the impact on the Italian economy. 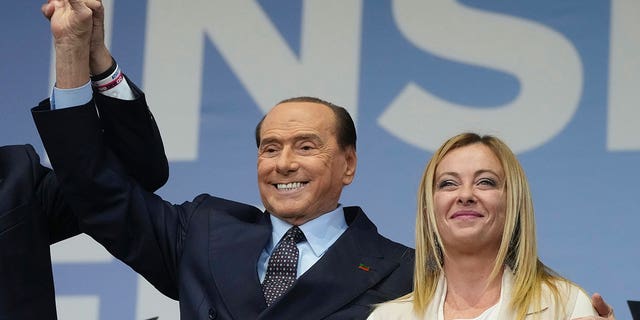 “Who’s harming Italy abroad? The opposition that is in opposition?” Letta wrote. “The president of the (lower) Chamber who delegitimizes EU sanctions against Russia? … Berlusconi who reconnects with the invader of Ukraine?”

The Renew Europe group of centrist and liberal lawmakers, the third-biggest group in the European Parliament, urged the European Peoples Party, to which Forza Italia belongs, to condemn the remarks.

“The EPP group says Putin is a threat to the West & must be defeated. Time to stop campaigning for his friends in the EU,” the Renew group tweeted.

Separately, EU Commission chief Ursula von der Leyen insisted that any friendly opening toward Russia was at the moment beyond the pale because of Putin’s continued aggression and targeting of civilian infrastructure.

“This is marking a new chapter in an already very cruel war. International order is very clear. These are war crimes,” she told EU legislators in a previously scheduled speech that was not in response to Berlucsoni. “These are acts of pure terror, and we have to call it as such.”

Previous White House press secretary stumped by question about energy producers: ‘trying to put them out of business’
Next More than 100 pro-life orgs, churches attacked since Dobbs leak