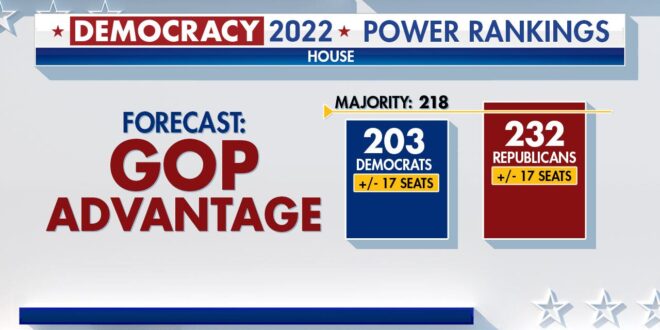 The Republicans are inching their way to victory in the House by making gains on the West Coast, even as pathways remain for the Democrats to stay in power. It is all about the lower chamber in this edition of the Fox News Power Rankings, as two highly competitive districts in California and Oregon move toward the GOP.

Power Rankings indicating that the GOP has the advantage in the House.
(Fox News)

The latest forecast shows Republicans winning 232 seats, or a 15–seat majority. Democrats would take the remaining 203 seats. That is a small shift in favor of the GOP since the previous forecast. Notably, if Republicans have a good night in November (in other words, if they win all the most competitive House races), the party would win 248 seats, or a 31-seat majority. That is “red wave” territory. Democratic Party supporters are still in this fight though. The forecast sees pathways for the Democrats to retain a majority, with their “best case” scenario totaling 220 seats, or 2 more than they need to stay in power. 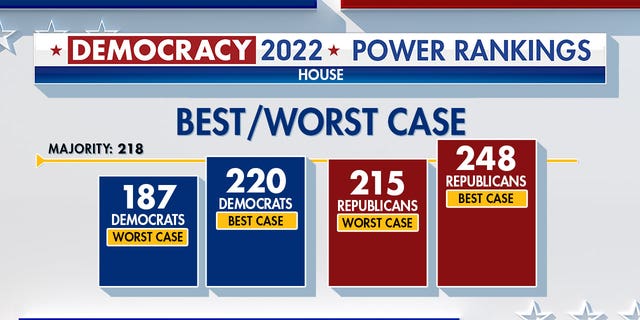 Power Rankings indicating that the GOP has the advantage in the House with a best/worst case scenario.
(Fox News)

Inflation remains the top issue of this election, with crime just behind it, and the GOP is winning over voters on both. The latest Fox News Polls have revealed that 89% of voters are “extremely” or “very” concerned about inflation and higher prices, and that voters trust the GOP to handle inflation by 13 points. Crime comes in second, with 79% of voters extremely or very concerned about higher crime rates. Voters trust the GOP to handle that problem by 15 points. Democrats make up ground on abortion, but that is the sixth top issue. Seventy-one percent of voters say they are extremely or very concerned about abortion policy, and voters trust Democrats six points more than the GOP.

WISCONSIN VOTERS SAY INFLATION, CLIMATE CHANGE ARE AMONG THEIR TOP VOTING PRIORITIES AHEAD OF MIDTERMS 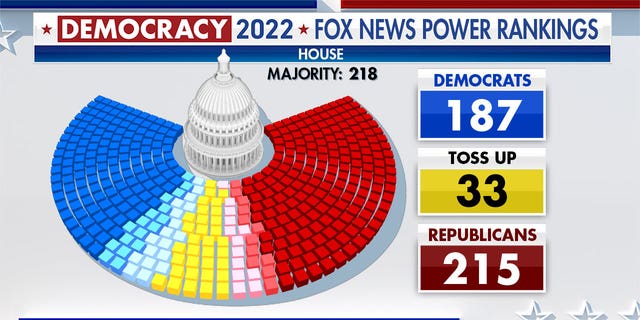 Power Rankings indicating a 33 Toss Up seats in the House with the GOP holding 215 and Democrats holding 187.
(Fox News)

With inflation and crime as the top two issues, it is little wonder that the Fox News Poll gives the generic Republican a 1-point advantage among registered voters who feel they are “certain to vote” in the midterms. This edge allows the party to play offense in left-leaning territory.

In San Diego, incumbent Democrat Mike Levin will face Republican challenger Brian Maryott again for California’s 49th district. Levin has won the district twice, but defeated Maryott by just a 6-point margin in 2020, and the district leans more conservative under new lines. Two figures tell the story of a highly competitive race. First, California holds non-partisan primary elections, and the results of those races can align with the outcome in November. In the 49th district, Democrats took just 51.4% of the vote combined, compared to 48.6% for the GOP. California also held a recall election last year, and according to data from the California Target Book, the 49th district under new lines would have voted to keep Democratic Gov. Gavin Newsom by only 2.4 points.

Maryott is not always a strong communicator, but he has said that the government should respect private medical decisions, and distanced himself from former President Trump’s efforts to overturn the results of the 2020 election, which likely will help in this generally left-leaning district.  He has much less cash to spend in the final weeks than Levin does (with $546,000 versus Levin’s $2 million), but GOP-aligned groups are investing heavily to close that gap. California’s 49th district moves from Lean D to Toss Up. 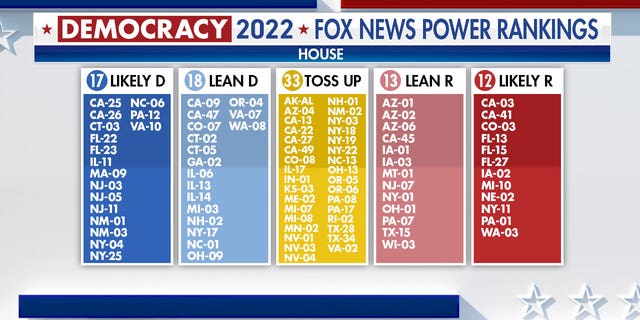 Further up the West Coast, Oregon’s 6th district is now one of the most competitive races on the board. On paper, this should not be the case. The newly created district includes suburban areas in southwest Portland, and just like California’s 49th, would have voted for Biden by double digits in 2020. However, voters in the Beaver State are not satisfied with Gov. Kate Brown, nor are they rallying around the Democrat’s possible successor, progressive candidate Tina Kotek. In the 6th district, Democrats have fielded another progressive, Andrea Salinas, who currently serves as a state representative counting Elizabeth Warren among her endorsers.

Salinas has focused on the environment in her legislative career, and that issue is likely to resonate with Oregon voters. On the other hand, this column noted above that inflation and crime are the top two concerns for voters, and Republican candidate Mike Erickson is focusing on both in this campaign. In commercials, Erickson tells voters that his career in supply chain management will help address the root causes of inflation. He also says he will be tough on crime, a hot topic in Portland after months of George Floyd-related protests and riots in 2020. Crime is likely to continue to weigh heavily on the race; Erickson and Salinas both have fathers who were police officers, and Salinas has recently voted for increased police regulation, though she has not supported “defunding” the police. Like Maryott, Erickson has been running behind on fundraising, but national GOP groups are pouring millions of dollars into the race. Oregon’s 6th district moves from Lean D to Toss Up. 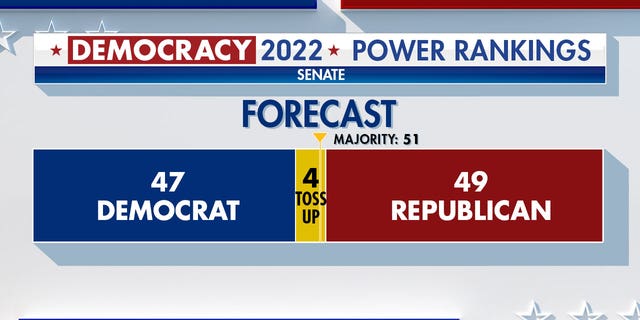 This forecast also shifts two competitive races towards the Democrats, though Republicans still have the advantage in both.

In Iowa’s 1st district, Rep. Mariannette Miller-Meeks is up for re-election for the first time. To say that Miller-Meeks won her district by the skin of her teeth in 2020 would be an understatement; she received six more votes than her opponent. That was the thinnest margin of all 435 House districts. Iowa has been trending right for several cycles now, and in a GOP-leaning national environment, the party still has an advantage. However, Miller-Meeks’ new district is similar to her old one, and a new Des Moines Register poll shows Republican Sen. Chuck Grassley in a surprisingly tight race with Democratic challenger Mike Franken. It is no longer appropriate to give Miller-Meeks a clear edge. Iowa’s 1st district moves from Likely R to Lean R. 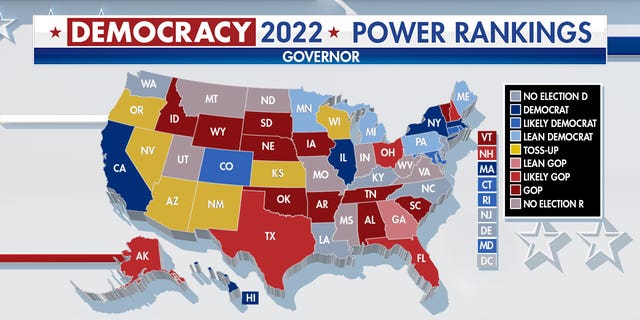 Power Rankings for governor’s races across the country.
(Fox News)

Finally, to Big Sky Country, where the newly created 1st congressional district in Montana looks closer than the Republicans would like. The 1st district, which includes cities Missoula and Bozeman, is relatively moderate for a deep red state; it would have voted for former President Trump by 6.9 points in 2020. Republican primary voters chose Ryan Zinke as their candidate. He served in the Trump administration as secretary of the interior until he became the subject of multiple ethics investigations; Trump announced Zinke’s departure less than two years into his term. His challenger, Democrat Monica Tranel, a former Olympic rower, has been traveling around the state with a local-issues message. Her party is likely to be the major drag here; Democrats are unpopular in this largely White, working-class state and Tranel will have a hard time convincing voters to switch sides in this cycle. However, the race is competitive. Montana’s 1st district moves from Likely R to Lean R.

3 weeks to go until election day

The clock keeps ticking toward election day, and at least some voters in most states can now cast a ballot. Since last week, key battlegrounds Colorado and Ohio started absentee voting, and Nevada joins the list tomorrow. That will bring the total up to 48 states. Early in-person voting has also started in Arizona, home to highly competitive Senate and governor’s races, plus Illinois. Our correspondents are on the ground in every key state, so stay tuned to Fox News Channel as Democracy 2022 continues.

Rémy Numa is the lead political affairs specialist for Fox News Channel. You can follow him on Twitter: @remynuma.