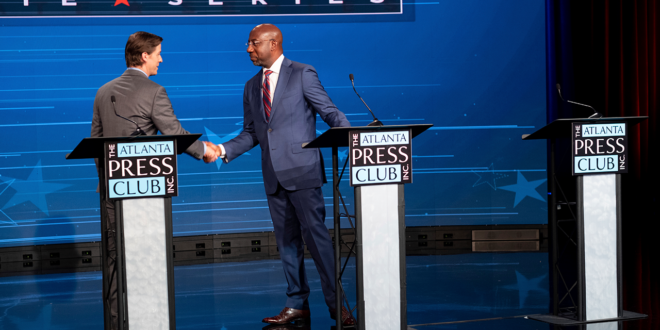 Walker’s absence was highlighted throughout the evening by Warnock, Oliver and debate moderators, who even gave the present candidates the opportunity to respond to an answer the former football star “might’ve” given.

“I think it’s important to point out that my opponent Herschel Walker is not here, and I think that half of being a senator is showing up,” Warnock said at the beginning of the debate. “That’s half of life. And I have shown up for the people of Georgia time and time again.”

Warnock and Walker participated in the one and only debate between them on Friday in Savannah. Walker initially said over the summer he would debate his Democrat opponent anytime, but that his campaign needed to negotiate the details.

The campaign for the Trump-endorsed Republican alleged that the organizers of Sunday’s Atlanta Press Club debate were biased in favor of Warnock.

“It was unfortunate to see that even in his second try at a debate, Raphael Warnock couldn’t give a single direct answer,” Walker spokesperson Will Likely said in a statement. “Winners don’t need a second try and Herschel Walker was the clear winner of Friday night’s debate.”

Walker will join Fox News’ Sean Hannity for a town hall on Monday.

Throughout the event, Warnock took the opportunity to slam his GOP challenger without pushback. He called out Walker for lying about details of his life, including the Republican’s reported domestic violence and false claims regarding his educational achievements. Walker has denied some accusations about his alleged violence against former romantic partners.

The Democrat also pushed back on allegations he ran over his ex-wife’s foot with a car during an argument in 2020.

GEORGIA SENATE DEBATE: WARNOCK DECLINES TO SAY IF BIDEN SHOULD RUN IN 2024 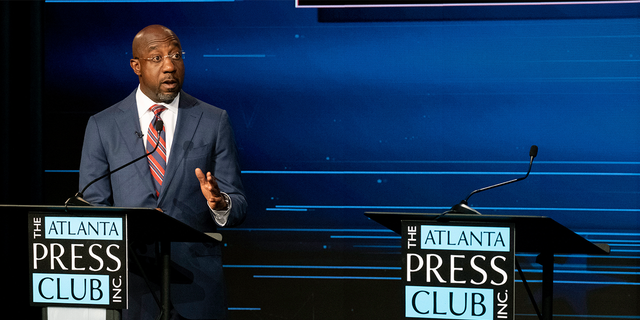 Sen. Raphael Warnock, D-Ga., speaks next to an empty podium set up for Republican challenger Herschel Walker, who was invited but did not attend, during a U.S. Senate debate as part of the Atlanta Press Club Loudermilk-Young Debate Series in Atlanta on Sunday, Oct. 16, 2022.

“I have never been violent to anybody for any reason. I have spent my entire life as a citizen, as a pastor of Dr. King’s church steeped in the philosophy of nonviolence,” he said.

“My opponent, on the other hand, has a well-documented history of violence, and he hasn’t come clean about it,” the incumbent senator continued.

Walker is also facing accusations he funded a woman’s abortion in 2009 despite marketing himself as pro-life.

Oliver, who would be considered an afterthought if he ran for office in any other state, has an opportunity to make a difference in November’s general election and force a runoff because Georgia law requires a candidate to receive 50% plus one vote to secure a victory outright. 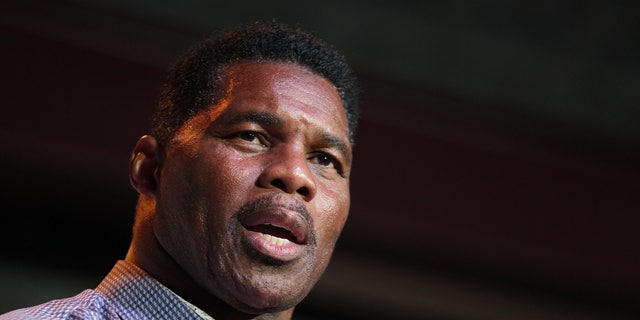 The campaign for Herschel Walker alleged that the organizers of Sunday’s Atlanta Press Club debate were biased in favor of Raphael Warnock.
(AP Photo/Akili-Casundria Ramsess, File)

“I don’t have any interest in partisan bickering. I owe no allegiance to either party. I only owe allegiance to you, the voter,” Oliver said Sunday.

He said he supports Georgia’s requirement that a candidate must surpass 50% of the vote to head to Washington because he believes a senator should not represent all of Georgia after receiving less than half of the state’s support.

The Libertarian also attacked Walker on Sunday during the former Georgia Bulldog’s absence. Oliver did not shy away from grilling his Democrat opponent either, criticizing him for voting for the Inflation Reduction Act that the Congressional Budget Office says will not reduce inflation and accusing him of not reading legislation on Capitol Hill.

Oliver made his position clear on a number of issues, including his support for the Second Amendment, his opposition to expanding Medicaid and his desire to reform the criminal justice and immigration systems.

However, Warnock minimized the Libertarian’s candidacy, saying “the reality” is that either himself or Walker “will represent Georgia in the Senate.”

Since 2014, Libertarians in Georgia have won 2% of the vote on average in elections for governor and U.S. senator.