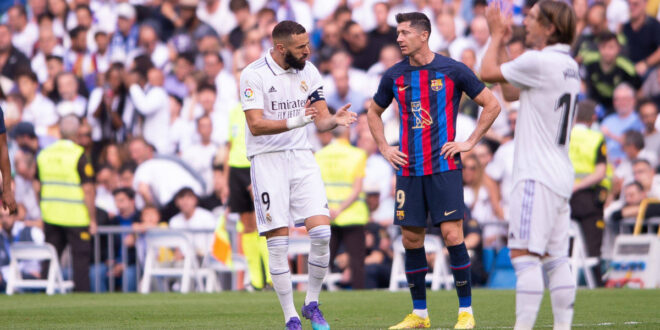 In what started with a classic Karim Benzema performance and ended with three points, Real Madrid moved clear atop the La Liga table with a 3–1 El Clásico win over Barcelona.

On Monday, Benzema is expected to be awarded the Ballon d’Or after a stunning year that saw him take home the Champions League title. If he wins, the French star will become only the second player (after Luka Modrić in 2018) to break the deadlock that Cristiano Ronaldo and Lionel Messi have held on the award since 2008.

But on Sunday, Benzema only had rival Barcelona in his sights. After scoring 44 goals across all competitions last season, Benzema added his fourth league goal in six games this season by opening the scoring early for Real Madrid.

Just 12 minutes in, Benzema benefited from a darting run by Vinícius Júnior as the Brazilian drew away the defense and saw his shot saved. But the rebound fell directly to Benzema, who somehow dispatched his shot through a host of Barcelona defenders in front of goal for the 1–0 lead.

Real Madrid midfielder Federico Valverde joined in on the action in the 35th minute to double the home side’s lead. Once again, it was a Vinícius run that created the chance before Ferland Mendy found Valverde at the top of the box. With plenty of time and space, the Uruguayan ripped a thunderous, low shot into the bottom corner of the net.

In the 52nd minute, Benzema had another brilliant individual effort—where he took the ball on the wing, cut in and effortlessly curled it to the far post—wiped off the board for offside.

Barcelona made things interesting in the 83rd minute when Ferran Torres scored after a highlight-reel run from Ansu Fati, cutting the lead in half.

But Real Madrid added a late consolation goal eight minutes later after Rodrygo was taken down in the penalty area. With Benzema subbed off, the Brazilian stepped to the spot and converted to complete the scoring on the afternoon in Madrid.