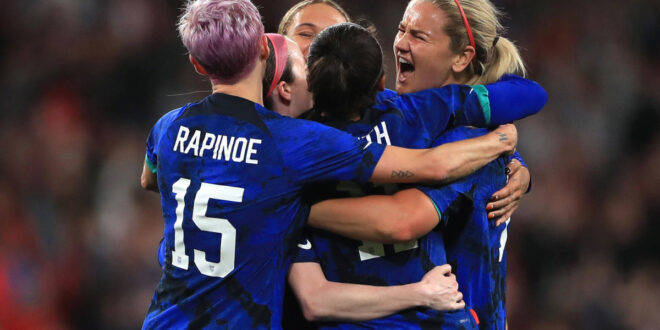 Amid a week in which the U.S. women’s national team confronted consecutive losses for the first time in over five years, all while its players reel from and deal with the fallout of investigations into NWSL, there was a reprieve.

FIFA unveiled its latest women’s world ranking on Thursday, and even after defeats to England and Spain, the U.S. remains the top-ranked team in the world. With that comes a place in the seeded pot of the 2023 Women’s World Cup draw later this month, which contains the top six teams in the world and co-hosts Australia and New Zealand.

If there’s a north star for the U.S. to follow, it’s that friendly results don’t really mean much in the long run (well, save for Spain’s win, which vaulted La Roja just above Canada for the all-important No. 6 ranking and a place in the top pot), and that, until proven otherwise in meaningful, knockout matches on the World Cup stage, the notion that more of Europe is catching up and that the U.S. is due to come down a peg remains theoretical.

It’s unusual but not unprecedented during this seven-year run of being world champion for the U.S. to be in a position of having to question itself. The last set of consecutive losses, in March 2017 to England and France, sparked some of the same conversation. A little over two years later after the World Cup final in Lyon, the U.S. was celebrating and putting a fourth star on its kits.

And just as England wasn’t at full strength last week and Spain was severely shorthanded due to the ongoing player revolt focused on manager Jorge Vilda and the Spanish federation, the U.S. also wasn’t playing with a full deck. Due to injuries, maternity and other reasons, the U.S. squad that qualified for the 2023 World Cup and 2024 Olympics this summer and the one that flopped overseas over the past week could be markedly different to the one that’s headed down under next summer.

That doesn’t mean there isn’t cause for concern and that the ongoing transition and integration period for younger and less-experienced U.S. talents will undoubtedly go smoothly. A pair of friendlies against Germany next month—when the NWSL season is done and the squad is a bit more robust—may be a bit more indicative of where Vlatko Andonovski’s project stands entering a World Cup year.

By that time, the U.S. will have its marching orders for the tournament it’s seeking to win for a third straight time. The Oct. 22 draw in Auckland will be the first of its kind for a 32-team Women’s World Cup, where third-place group finishers no longer have a safety net and the field is a bit more inclusive. Only 29 of the 32 places will have been clinched by the time the draw is conducted, though, with FIFA’s 10-team, intercontinental playoff due to take place in New Zealand in February. Those three remaining spots (one to Portugal/Thailand/Cameroon, one to Chile/Senegal/Haiti, one to Paraguay/Taiwan/Panama/Papua New Guinea) will have placeholders in the draw so that, just like what happened with the U.S. men, it’s possible a few months go by before the U.S. women know the full extent of who is in their group.

For the next week, though, it’s about assessing the possibilities. Beyond the seeded pot, the remaining three pots are sorted in order by the all-important October FIFA ranking. The field for the draw looks as follows (FIFA ranking in parenthesis):

Strictly by the numbers, and since the U.S. cannot be paired with Canada in the group stage due to them coming from the same region, the toughest draw for the U.S. would include fellow 2019 Women’s World Cup finalist Netherlands, Denmark and Nigeria (two European nations can be in the same group). There isn’t a quartet that should threaten the U.S.’s ability to get out of the group, but a second-place finish could yield a more daunting path in the knockout phase. Then again, the U.S. ran through Spain, France and England before besting the Dutch three years ago, so if a tough road is required, it certainly wouldn’t be the first time.

There’s ample history with other teams in Pot 2, with foes from the 1991 final (Norway), 1999 final (China), 2011 final (Japan) also able to be drawn against the U.S., while former U.S. manager Pia Sundhage remains in charge of Brazil.

In Pot 3, the U.S. can only be grouped with six of the eight teams, with fellow Concacaf sides Costa Rica and Jamaica off limits. There’s a range of experience, with first-time entrants Ireland and Vietnam, second-time qualifier Switzerland and a slightly more experienced South American duo joining the Euro 2017 runner-up Danes. The U.S. beat Colombia in its previous two World Cup appearances—in the round of 16 in 2015 and in the group stage in 2011.

The fourth pot is where things could either get slightly more tricky—or considerably more easy. Should Portugal, Chile and Paraguay win their respective intercontinental playoff brackets and the U.S. draw one of them, it’d bring up the overall degree of difficulty for the group. Nigeria, the top-ranked side in the fourth pot, has been a repeat opponent for the U.S. on the grand stage.

Ultimately no group should be the reason for any potential U.S. downfall down under. The chief issue as things stand is ensuring that the U.S. has the play and plan to match its FIFA ranking and remain at No. 1 when the trophy is lifted next summer. England and Spain fired warning shots over the last week, and there’s a sense of vulnerability around the team following some unusual setbacks. But this is a group that generally thrives in the face of adversity, and its roadmap for competing at another World Cup will be sorted soon enough.