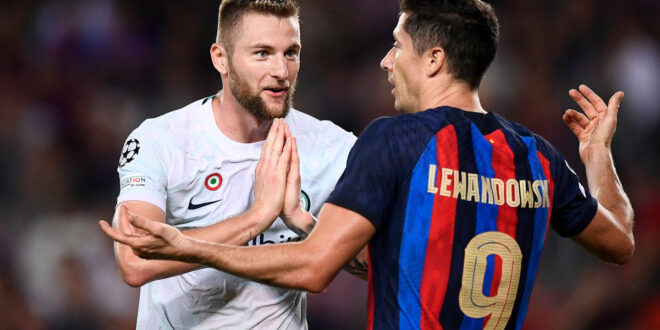 Barcelona’s dramatic draw vs Inter delays the inevitable in UCL

So much for the instant revolution. Barcelona is quite obviously playing far better football this season than it was last, but after taking such a financial gamble in the summer—after mortgaging the future of the club—it expects far better than a second successive Champions League exit in the group stage. And yet after a relentlessly dramatic 3–3 draw against Inter Milan at Camp Nou on Wednesday, Barça is on the brink of just that.

An Inter win on the next matchday over Viktoria Plzen, the group’s bottom side after four straight defeats, will be enough to send the Italian side through with Bayern Munich and consign Barça again to third place and the Europa League (by virtue of last week’s loss to Inter and Wednesday’s draw, Inter holds the tiebreaker). With that would come serious repercussions for the reboot of the club, both financially and in terms of any sense of competitive momentum. And this is not just about immediate consequences: the pattern of Barcelona Champions League games under Xavi has become very familiar and must feel very frustrating.

Yet the feeling is not that Barcelona has been playing poorly. On the contrary, as seven wins and a draw from eight games has left it top of La Liga entering Sunday’s Clásico vs. Real Madrid. It has not played especially badly in either defeat in the Champions League, either. Against Bayern, in particular, Barcelona had chances, but after a couple of uncharacteristic misses from Robert Lewandowski, Wednesday’s hero, it conceded twice early in the second half. Against Inter last week, a couple of key handball decisions went against Barcelona, leading to a sense of misfortune.

And yet in both of those games there was a failure to create a commensurate amount of scoring opportunities. Barcelona had a lot of the ball, but, as the games wore on, it lacked a little luck but also imagination or ruthlessness. The final minutes last week were characterized by aimless cross after aimless cross, most of them delivered by Ousmane Dembélé, whose sprightliness out wide was left as the sole spark.

There must have been fears the pattern was repeating on Wednesday, as Barcelona had almost all the ball but couldn’t score. Twice Inter went close, Edin Džeko hitting the bar after connecting with a right-wing free kick and Denzel Dumfries drilling an effort on the counter too close to Marc-Andre ter Stegen. But Barça got away with it and, having squandered a number of opportunities, finally scored with six minutes remaining in the first half. Raphinha won the ball on the right and, rather than crossing, played a clever low pass to Sergi Roberto, who had space to look up and measure a low cross for Dembélé to slam in. The frenzied celebrations from Xavi and his coaching staff suggested just how vital the goal was.

Any sense of relief, though, was short-lived. The second half had looked to be following the path of the first, with Barcelona in control of the ball. Inter had barely ventured over the halfway line when, after 50 minutes, Alessandro Bastoni swept in a cross from the left. It should have been straightforward for Gerard Piqué, playing because of the injury to Andreas Christensen, but, apparently unaware that Nicolò Barella was lurking behind him, he let the ball go. Barella still had work to do but cushioned the ball on his thigh and smashed an equalizer past ter Stegen.

That changed the game immensely. Inter’s use of the ball suddenly looked deadly as Barcelona’s defense disintegrated. ter Stegen made fine saves from a Hakan Çalhanoğlu 20-yard drive and a Milan Škriniar header. But the second Inter goal was coming and it arrived after 63 minutes as Lautaro Martínez took down a Çalhanoğlu ball on his chest, going past Eric García as he did so and then drilled a low shot in off both posts.

Lewandowski, latching onto a loose ball after his initial attempt had been blocked, lashed the first of two equalizers with nine minutes remaining, the biggest summer buy of them all providing the lifeline in the competition, however temporary it may be. That set up the grandstand finish, and briefly it seemed that Inter was wobbling. But then a clever clearance from goalkeeper Andre Onana released Martínez, who showed admirable presence of mind to hold the ball up and square for Robin Gosens to slot in the third and, at the moment, eliminate Barça with two games to spare. But even then, the game wasn’t over and, in the second minute of injury time, Lewandowski headed another equalizer, rising with a purpose to secure the point.

It’s a valuable point, one that at least keeps Barcelona with a mathematical chance of reaching the last 16 for another couple of weeks, but a win was required. And the fact is that Barcelona keeps being found out in the same manner, keeps failing to make possession count, keeps losing defensive shape as it chases goals. This is still largely a young side and it may mature—but the financial risk taken on this summer means that Barcelona has little time, and patience is in short supply.