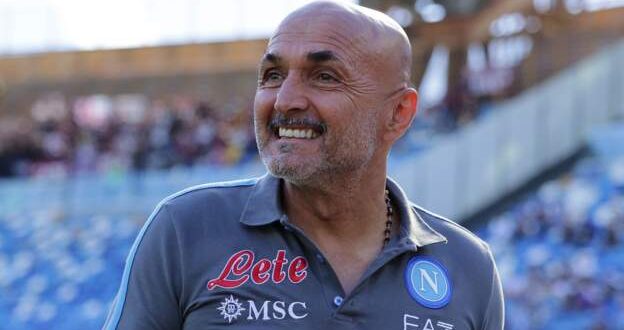 Last May, after Luciano Spalletti’s beloved Fiat Panda was stolen, Napoli’s ultras placed a banner outside the club’s stadium promising the car would be returned – if he left the club.

Supporters were unhappy after Napoli’s Scudetto challenge fell away, and placed the blame at the door of their manager, a veteran of Serie A coaching without ever securing an Italian top-flight league title.

Spalletti stayed – he said he would have only accepted the offer of his car being returned if his CDs were undamaged anyway – and now those fans who were demanding he leave I Partenopei are being made to eat their words.

Napoli are flying this season, domestically and in Europe. They are top of Serie A, unbeaten and the league’s top scorers.

In the Champions League, they have three wins from three in Group A, scoring 13 goals in the process, including a 4-1 thrashing of Liverpool and a 6-1 hammering of Ajax.

“What we saw on the pitch against Liverpool was a team that plays to an idea, everybody thinks the same way,” explained European football expert Guillem Balague.

“It doesn’t reinforce individual talent, you all have to think one way – run after the ball, counter attack, but six stay behind the ball – things that don’t make you shine personally but benefit the team.”

Spalletti can take a lot of the praise for Napoli’s excellent start. His emphasis on quick passing and attacking from wide, while also being careful in possession, draws the best out of a Napoli side that looked to have lost its best talents in the summer, but which has instead been reinvigorated.

Despite returning to the Champions League for the first time in three years, captain Lorenzo Insigne, all-time top scorer Dries Mertens and totemic defender Kalidou Koulibaly all left the club in the summer, leading to yet more fan outcry.

But then came some brilliant recruitment.

Most of the focus has been placed on electrifying Georgian attacker Khvicha Kvaratskhelia, already nicknamed Kvaradona – but impressive scouting is in evidence elsewhere, too.

Kim Min-jae has ensured Koulibaly has not been missed at the the back, while midfielder Andre Anguissa, who was on loan from Fulham, has carried on his terrific form after his deal was made permanent.

All the new signings fit Spalletti’s playing style, which he has employed almost exclusively in his home country through a nearly 25-year coaching career. His only venture outside of Italy was a successful spell at Zenit St Petersburg in Russia, where he won his only top flight league titles.

“He took the job with Zenit when there was a hell of a lot of money in the Russian Premier League, he was successful there, won the league, famously ripped off his shirt and whirled it around his head in the Siberian snow.

“And then he was fired after a falling out – and he does this thing where he says, ‘If you give me a five-year contract and you sack me after year three, I will wait out the years on my contract, and I will make you pay every single rouble or euro’.”

There is an alternative history where he succeeds Jose Mourinho at Chelsea, given that he had conversations with Roman Abramovich during his first spell with Roma. However, Spalletti did not speak English at the time and did not feel ready for the job.

Despite having managed some of the biggest teams in Serie A since then, he has not always been treated with the greatest respect.

After Zenit, he was re-hired by Roma in January 2016, where he was given the unenviable task of easing living club legend Francesco Totti into retirement.

Inter Milan followed, lifting them out of the doldrums and into the Champions League for the first time in seven seasons. But in summer 2019, the club was taken over and the new regime decided they wanted Antonio Conte instead.

Spalletti, shortly after being handed a new two-year contract, was sacked. Rather than rush straight back into management, he was happy to bide his time on his Tuscany farm.

An idiosyncratic character in the often mad world of modern football, Spalletti spent quality time with his pet duck Snow White and his extensive football shirt collection, before the right job came along.

That job was Napoli – and it has been, in this current season, a match made in heaven.

“Italians have a phrase, sprezzatura – effortless style,” added Horncastle. “It doesn’t matter who they are playing against, they will score three goals in the first half, then two minutes into the second they will score again and kill the game.

“Their coach has been unfairly maligned over the past 15 years because he hasn’t won titles in a top-five league. He was the guy who was appointed to retire Totti at Roma, who was appointed at Inter when they weren’t a contender.

“Luciano Spalletti is one of the influential, innovative, counter-cultural coaches that Serie A has produced in the past 15 years, and we are belatedly getting some recognition as to what a fine strategist he is.

They will look to continue their Champions League form at home to Ajax on Wednesday.

Whether this sensational streak can be maintained, whether a first Serie A title since the days of Diego Maradona can be won, whether an unlikely tilt at winning the Champions League can be made – all this remains to be seen.

What is certain is that Napoli have progressed to become one of the most entertaining and dangerous teams in Europe – and their manager can take a lot of the credit.