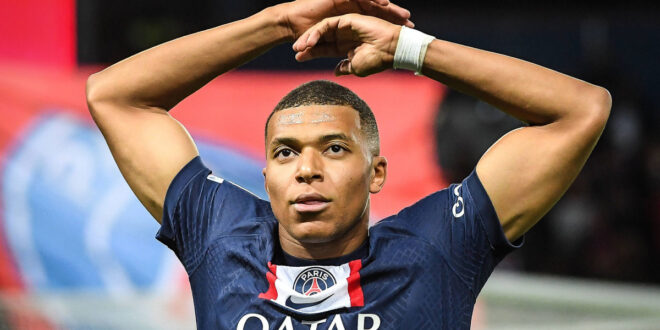 With Paris Saint-Germain, there is always the odd sense that the football is secondary. This is a project designed to promote the interests of the state of Qatar, populated by some of the biggest egos in the world game and watched by fleets of celebrities. For the record, PSG drew 1—1 with Benfica for a second straight week in the Champions League on Tuesday, a result that, coupled with Juventus’s surprise defeat away to Maccabi Haifa, leaves both just two points from the last 16. But really this was about Kylian Mbappé, and, on the day he became the club’s all-time leading scorer in the Champions League, a deluge of reports that he wants out as soon as possible despite signing a new contract this summer. It’s another chapter in the ongoing saga of his increasingly preposterous club career and this drama-laden organization.

This was a season that had appeared to be going well. Christophe Galtier looks like a more natural fit for PSG than many recent managers, somebody capable not merely of establishing a coherent tactical approach but also of navigating the perilous politics of the club. PSG sits top of Ligue 1 having dropped just four points in 10 games so far. Nobody really expected Lorient, a point behind, to be able to sustain its challenge. Marseille, another two points back in third, is perhaps a more realistic contender, but still, this season should bring a record 11th domestic title.

In the Champions League, which is, after all, the real test, there was a very good first-half performance against Juventus in the opening group game. Even if the away win over Maccabi Haifa and last week’s draw at Benfica were less impressive, there is no realistic prospect of PSG failing to make the last 16. Some of the football PSG has produced, in particular that from Lionel Messi in his second season at the club, has been sensational.

But PSG as a club is not one to inspire great loyalty. Given the huge disparity between PSG’s wealth and that of every club in the league, the only real challenge PSG faces is in the knockout rounds of the Champions League; players go there less for the challenge or for personal development and more for the money and the celebrity lifestyle. There seems to be little sense of team spirit. And that means there are constant rumors about players falling out with each other, constant jockeying for preferment.

It had been widely expected that Mbappé would leave for Real Madrid on a free transfer in the summer, only for him to stay after a major operation that included French president Emmanuel Macron and reportedly involved the payment of a signing-on fee of $120 million and a monthly salary of $5 million. But his relationship with Neymar had been strained for some time, and Mbappé is reportedly frustrated that the Brazilian was not sold over the summer.

Mbappé let it be known that he was not impressed with the club’s transfer activity after he spurned Madrid to stay and that he is frustrated at having to play always as a lone center forward rather in a front two or from the left—the left, of course, being the position Neymar usually occupies in PSG’s standard 4-3-3.

As well as securing Mbappé until 2025, PSG’s summer business also included around $160 million spent on midfielders Vitinha, Fabián Ruiz, Carlos Soler and Renato Sanches; defenders Nuno Mendes and Nordi Mukiele; and young forward Hugo Ekitike. Mbappé wanted more younger French players and fewer egos—other, presumably, than his own—so a proper pressing system could be introduced. To an extent that was what sporting director Luis Campos delivered, and he is understood to be sympathetic to Mbappé, but Antero Henrique, the other sporting director, struggled to sell players, leading to tension. Such was the firestorm set off by Tuesday’s round of reports regarding Mbappé’s immediate exit wish that Campos took to Canal+ prior to the first kick vs. Benfica to categorically deny there being truth to the story.

But there have been signs leading to this, and the first one that something was not quite right came in August as Mbappé stopped running and turned away in disgust after Vitinha, leading a break in the 5-2 win over Montpellier, opted to pass to Messi rather than the 23-year-old. In that same game, Mbappé missed a penalty and was then furious when Neymar insisted on taking a second spot kick 20 minutes later. That, though, came amid a run of four games in which PSG scored 21 goals, Mbappé getting four of them.

Since then, though, the goals have come rather less easily, and with Messi injured, PSG was held to a disappointing 0—0 draw with Reims. After Sergio Ramos had been sent off, it lapsed into petulance, and Mbappé and Neymar were booked late on as tempers flared. But then that’s always been the way at PSG: there is an ugly sense of entitlement about it, and Mbappé’s attitude is perhaps the natural consequence of a culture of indulgence.

Mbappé, who was withdrawn as a precaution late on Tuesday, got PSG’s goal, converting a first-half penalty and celebrating emphatically (he also had a sensational would-be winner chalked off for offside), but this was not the PSG of those early weeks of the season and, looking very flat, it was pegged back by a Benfica penalty, converted in the 62nd minute by João Mário. In terms of PSG’s progression to the last 16, the dropped points shouldn’t matter. The far bigger issue is Mbappé, his future, and the spreading waves of this week’s uproar.

Previous Refereeing abuse: Your experiences & what you want to see happening
Next ‘Jeopardy! Second Chance’ competition welcomes back past losers