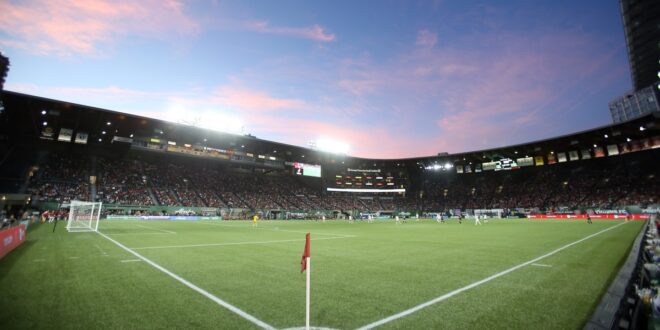 Paulson Removes Himself As Thorns, Timbers CEO Amid NWSL Scandal

Merritt Paulson removed himself as the CEO the Major League Soccer’s Portland Timbers and the National Women’s Soccer League’s Thorns Tuesday in the aftermath of a bombshell investigation that uncovered systemic emotional abuse and sexual misconduct in the NWSL.

The results of the independent investigation–commissioned by the U.S. Soccer Federation and led by former acting U.S. attorney general Sally Q. Yates and the law firm King & Spalding–said Paulson helped cover up sexual abuse and coercion allegations made against former Thorns coach Paul Riley during his time with the franchise in 2014 and ’15. The investigation began after former Thorns players Sinead Farrelly and Mana Shim came forward last September with accounts against Riley, who was fired from the North Carolina Courage after the allegations of misconduct were made public in The Athletic.

Paulson, the owner of both the Timbers and the Thorns, announced his latest decision to scale back his responsibilities a week after he temporarily stepped away from the day-to-day operations of the Thorns.

“As you know, I removed myself from Thorns decision-making, yet, in order for the organization to move forward and unite, I feel that another step is necessary,” Paulson said in a statement on Tuesday. “Effective immediately, I am removing myself as CEO of the Portland Thorns and Portland Timbers, and announcing a global search for a CEO of the organization.”

Last week, both clubs relieved longtime president of soccer and general manager Gavin Wilkinson and president of business Mike Golub of their duties for their own involvement in enabling a toxic workplace environment. According to Yates’s report, Wilkinson reportedly blamed Shim for “putting Riley in a bad position” during a conversation with the Western New York Flash on the ex-coach’s behalf and noted he would “hire [Riley] in a heartbeat.”

The report also uncovered an 2013 incident involving Golub in which he made an inappropriate sexual remark to former Thorns coach and current U.S. Soccer president Cindy Parlow Cone. Golub has been previously accused of creating a “toxic” work environment that reportedly included “lewd comments toward female employees and inappropriate physical contact,” per an August 2021 report by The Oregonian.

Paulson neglected to say whether or not he would sell the teams Tuesday, despite calls for him to do so. Last week, he said that the ownership group wouldn’t make a statement until the joint investigation by the NWSL and its players’ union is concluded next month.

Paulson did announce Tuesday that Heather Davis will continue to serve as interim president and interim CEO of the clubs and that Sarah Keane, the interim chief operating officer, will lead the search for a permanent CEO.

“I owe Sinead and Mana, the Thorns players and the NWSL my tireless effort to actively make sure what happened in 2015 never happens again,” Paulson wrote in his statement. “I apologize to our players, the organization, and the Portland community for the mistakes we made, including not being publicly transparent about Paul Riley’s termination. Our organization’s failures and mistakes were ultimately my responsibility, and my responsibility alone.

“It is devastating to me that my goal of creating the shining example of what a women’s sports team could be, has now become synonymous with abhorrent and predatory behavior.”

The Thorns currently stand to play in the NWSL playoffs on Oct. 23.

Previous Dundee Utd 1-0 Hibernian: Liam Fox’s side off bottom of Scottish Premiership after frantic clash
Next Celebrities react to Angela Lansbury’s death: ‘A glorious one’