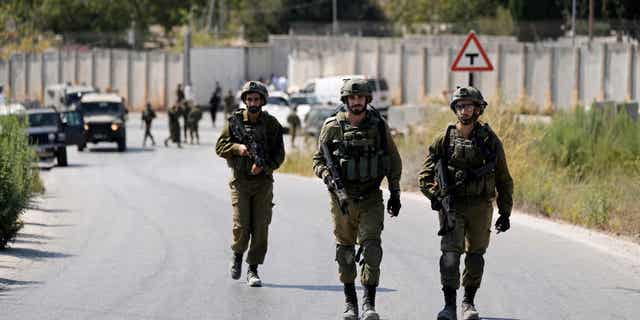 An Israeli soldier was killed Tuesday in a drive-by shooting in the northern West Bank, the army announced, saying that forces were searching for the attackers.

It was the latest in a wave of deadly Israeli-Palestinian violence in the area. It came days after a female Israeli soldier was killed at a checkpoint in east Jerusalem, and 24 hours after a 12-year-old Palestinian boy died of wounds sustained in an Israeli military raid in the occupied West Bank.

Israel has been carrying out nightly arrest raids across the West Bank since a spate of attacks against Israelis in the spring killed 19 people. Most of that activity has been focused in the northern West Bank.

WHAT IS THE GAZA STRIP?

Israeli fire has killed more than 100 Palestinians during that time, making it the deadliest year in the occupied territory since 2015.

The Israeli military says the vast majority of those killed were militants or stone-throwers who endangered the soldiers. But several civilians have also been killed during Israel’s monthslong operation, including a veteran journalist and a lawyer who apparently drove unwittingly into a battle zone. Local youths who took to the streets in response to the invasion of their neighborhoods have also been killed. At least three Israeli soldiers also have died.

Israeli soldiers work near site where an Israeli soldier was killed by Palestinian militant gunfire near the West Bank Jewish settlement of Shavei Shomron, on Oct. 11, 2022.
(AP Photo/Majdi Mohammed)

Israel says the arrest raids are meant to dismantle militant networks. The Palestinians say the operations have undermined their own security forces and are aimed at strengthening Israel’s 55-year military occupation of territories they want for an independent state.

The army said Tuesday’s shooting happened near the Jewish settlement of Shavei Shomron, a few kilometers (miles) northwest of the Palestinian city of Nablus. It said the soldiers were attacked by a pair of assailants in a vehicle who fled.

The Den of Lions, a new militant group led by young fighters from Nablus, claimed responsibility.

“A group of our heroic fighters carried out a qualitative operation,” the group said in a statement. “We say to the settlers besieging the city of Nablus from all directions, today we will see who will besiege whom.”

In Jerusalem, meanwhile, Israeli forces continued to search the Shuafat refugee camp for the gunman who killed a female soldier Saturday night.

Israel captured the West Bank in the 1967 Mideast war. The area is now home to roughly 500,000 Israeli settlers. The international community widely considers the settlements illegal and obstacles to peace.

The Palestinians claim all of the West Bank, along with east Jerusalem and the Gaza Strip, for a future independent state.