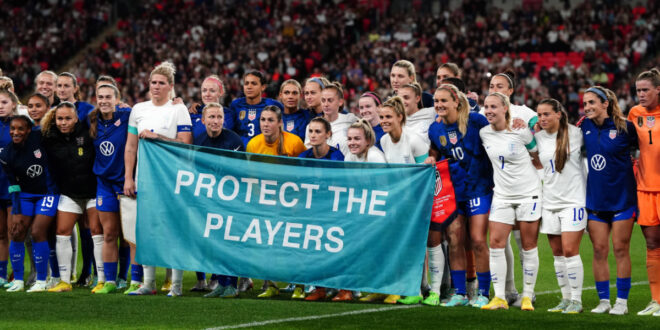 The United States women’s national team joined arms with England for a moment of solidarity in honor of victims of sexual abuse Friday ahead of their international friendly match in London.

Players from both countries gathered in the center circle inside the iconic Wembley Stadium before the match wearing teal armbands and carrying a banner that read “PROTECT THE PLAYERS.” The players held the banner while taking a picture on the pitch while the lights along the stadium’s arch were lit in teal.

The USWNT is currently in Europe for a two-game tour, which will continue against Spain on Oct. 11 at El Sadar Stadium in Pamplona.

Friday’s poignant gesture follows a tumultuous week in the National Women’s Soccer League in the wake of a bombshell investigation that uncovered systemic emotional abuse and sexual misconduct throughout the league. The results of the probe were released Monday and have already resulted in the dismissal of several high-ranking executives among various NWSL teams.

Earlier this week, the Thorns and Red stars announced front office changes stemming from the results of the report. Thorns president of soccer and general manager Gavin Wilkinson and president of business Mike Golub were dismissed Wednesday—a day after owner Merritt Paulson stepped down. Additionally, Chicago announced Wednesday that its board of directors voted to remove Arnim Whisler as chairman.