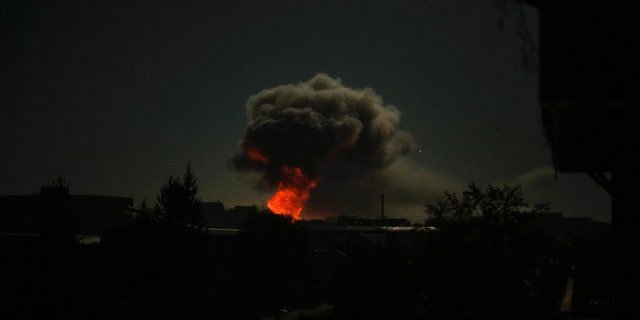 A series of explosions rocked the eastern Ukraine city of Kharkiv early Saturday, sending towering plumes of illuminated smoke into the sky and triggering a series of secondary explosions.

There were no immediate reports of casualties.

The blasts came hours after Russia concentrated attacks in its increasingly troubled invasion of Ukraine on areas it illegally annexed, while the death toll from earlier missile strikes on apartment buildings in the southern city of Zaporizhzhia rose to 14.

Kharkiv Mayor Ihor Terekhov said on Telegram that the early-morning explosions were the result of missile strikes in the center of the city. He said that the blasts sparked fires at one of the city’s medical institutions and a nonresidential building.

ZELENSKYY INTERVIEW: RUSSIA HAS BEGUN TO ‘PREPARE THEIR SOCIETY’ FOR POSSIBLE USE OF NUCLEAR WEAPONS

In a rebuke to Russian President Vladimir Putin and his conduct of Europe’s worst armed conflict since World War II, the Norwegian Nobel Committee awarded the Nobel Peace Prize to human rights organizations in his country and Ukraine, and to an activist jailed in Russia’s ally Belarus.

Putin this week illegally claimed four regions of Ukraine as Russian territory, including the Zaporizhzhia region that is home to Europe’s largest nuclear power plant, whose reactors were shut down last month.

Fighting near the Russian-occupied Zaporizhzhia Nuclear Power Plant has alarmed the U.N.’s atomic energy watchdog, which on Friday doubled to four the number of its inspectors monitoring plant safeguards. An accident there could release 10 times more potentially lethal radiation than the world’s worst nuclear disaster at Chernobyl in Ukraine 36 years ago, Ukrainian Environmental Protection Minister Ruslan Strilets said Friday.

“The situation with the occupation, shelling, and mining of the Chernobyl and Zaporizhzhia nuclear power plants by Russian troops is causing consequences that will have a global character,” Strilets told The Associated Press. 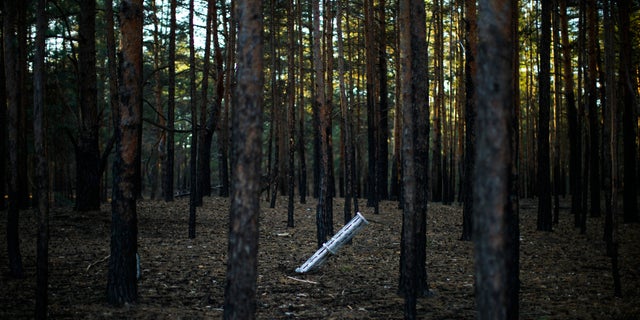 A Russian rocket sticks out of the ground in a forest near Oleksandrivka village, Ukraine, Thursday, Oct. 6, 2022.
(AP Photo/Francisco Seco)

The U.N. watchdog, the International Atomic Energy Agency, reported more trouble at the plant, saying Friday on Twitter that external power had again been cut off to one of Zaporizhzhia’s shutdown reactors, necessitating the use of emergency backup diesel generators to run safety systems.

The city of Zaporizhzhia is located 53 kilometers (33 miles) away from the nuclear plant as a crow flies and remains under Ukrainian control. To cement Russia’s claim to the region, Russian forces bombarded the city with S-300 missiles on Thursday, with more attacks reported Friday.

Ukrainian authorities said the death toll from the strikes on apartment buildings rose to 14 on Friday, while 12 people wounded in the bombardment remained hospitalized.

AS PUTIN TURNS 70, FORMER RUSSIA INSIDER WEIGHS IN ON LIKELIHOOD OF NUCLEAR MOVE

With its army losing ground to a Ukrainian counteroffensive in the south and east, Russia has deployed unmanned, disposable Iranian-made drones that are cheaper and less sophisticated than missiles but still can damage ground targets.

The Washington-based Institute for the Study of War said Russia’s use of the explosives-packed drones was unlikely to affect the course of the war. 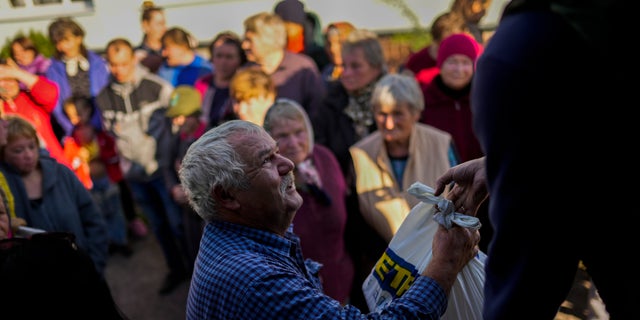 “They have used many drones against civilian targets in rear areas, likely hoping to generate nonlinear effects through terror. Such efforts are not succeeding,” analysts at the think tank wrote.

In other Moscow-annexed areas, Russia’s Defense Ministry reported Friday that its forces had repelled Ukrainian advances near the city of Lyman and retaken three villages elsewhere in the eastern Donetsk region. The ministry also claimed that Russian forces had prevented Ukrainian troops from advancing on several villages in the southern Kherson region.

Ukrainian President Volodymr Zelenskyy said in his nightly video address Friday that this week alone, his military has recaptured 776 square kilometers (300 square miles) of territory in the east and 29 settlements, including six in the Luhansk region, which Putin has annexed. In total, Ukrainian forces have liberated 2,434 square kilometers (940 square miles) of land and 96 settlements since the beginning of its counteroffensive, he said.

In Ukraine’s Dnipropetrovsk region, Russian troops shelled the city of Nikopol overnight, killing one person, wounding another and damaging buildings, natural gas pipelines and electricity systems, the governor reported. Nikopol lies along the Dnieper River across from Russian-held territory near the nuclear power plant. The city has been shelled frequently for weeks.

The trail of Russia’s devastation and death from areas where its troops retreated became clearer Friday. A report by Ukrainian First Deputy Minister of Internal Affairs Yevhen Yenin revealed that 530 bodies of civilians have been found in Ukraine’s northeastern Kharkiv region since Sept. 7. 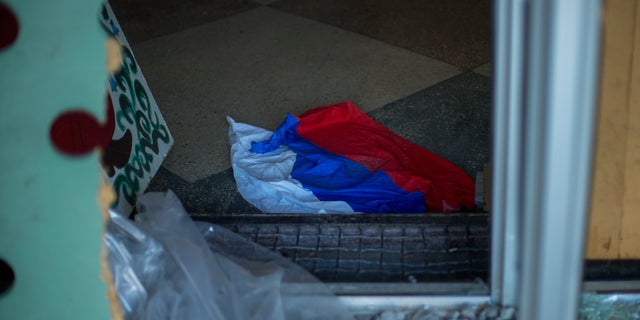 The residents killed during the Russian occupation included 257 men, 225 women and 19 children, with 29 people unidentified, Yenin said. Most of the bodies were found in a previously disclosed mass grave in the city of Izium.

According to Yenin, the recovered bodies bore signs of gunshots, explosions and torture. Some people had ropes around their necks, hands tied behind their back, bullet wounds to their knees and broken ribs.

In recently recaptured Lyman, workers found 200 individual graves and a mass grave with an unknown number of victims, Donetsk Gov. Pavlo Kyrylenko reported on Telegram. In Sviatohirsk, 24 kilometers (15 miles) from Lyman, 21 bodies of civilians were reburied.

Russian military equipment and weapons, meanwhile, is getting into Ukrainian hands. Britain’s Ministry of Defense said Friday that Ukrainian forces have captured at least 440 tanks and about 650 armored vehicles since the Russian invasion started Feb. 24. 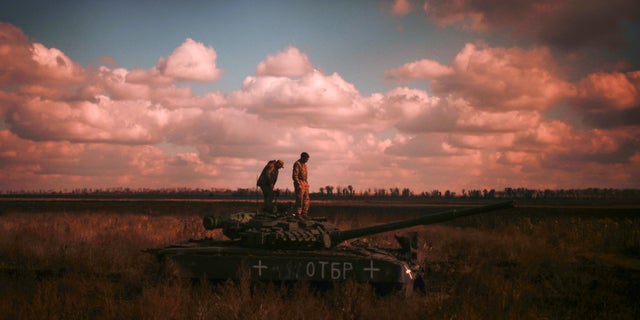 “The failure of Russian crews to destroy intact equipment before withdrawing or surrendering highlights their poor state of training and low levels of battle discipline,” the British ministry said. “With Russian formations under severe strain in several sectors and increasingly demoralized troops, Russia will likely continue to lose heavy weaponry.”

Putin ordered a partial mobilization of Russian army reservists last month to reinforce manpower on the front lines in Ukraine. Mistakes have dogged the military call-up, however, and tens of thousands of men have fled Russia, unwilling to fight Putin’s war.

That has left Russia desperate for troop reinforcements. The Ukrainian military said Friday that 500 former criminals have been mobilized to reinforce Russian ranks in the eastern Donetsk region, where Ukrainian forces have retaken territory. Law enforcement officers are commanding the new units, the military said.

Russia’s state news agency Tass reported Friday that a court in the Russian city of Penza had dismissed the first case against a Russian man called up to serve but who refused. The 32-year-old man’s lawyers had argued that the law under which he was charged applies only to conscription evaders, not those subject to the partial mobilization.

In another sign of trouble, reports have surfaced of poor training and few supplies for the new Russian troops. At least two Russian cities — St. Petersburg and Nizhny Novgorod — announced Friday they were canceling their Russian New Year’s and Christmas celebrations and redirecting that money to buy supplies for Russian troops.

Under increasing pressure from his own supporters as well as critics, Putin continued to reshuffle his military’s leadership, replacing the commander of Russia’s eastern military district.