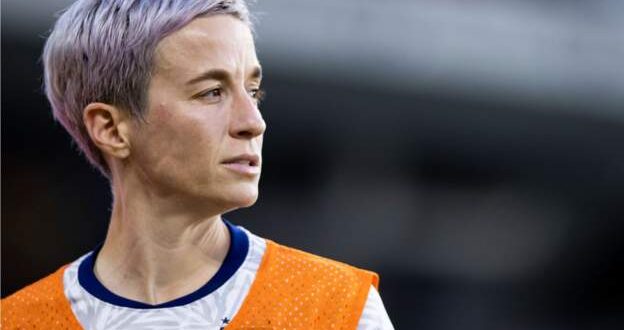 The United States’ upcoming friendly with England on Friday serves as a “nice distraction” for US players after an inquiry uncovered “systemic” abuse and misconduct in their national league, says winger Megan Rapinoe.

The findings, from an independent investigation into America’s National Women’s Soccer League (NWSL), were released earlier this week.

Earlier on Thursday, England forward Beth Mead said the Lionesses “will be doing something ” to show support to their US counterparts at Wembley.

Speaking at a pre-match press conference, Rapinoe said she and her team-mates had an “incredible ability to shoulder so much”, but added it had been “harder to compartmentalise”.

“We’re really excited to play and that’s a nice distraction,” she said. “This is an incredible game, an incredible moment, that sits nicely with this horrific thing.

“The players have pushed it to this point where it’s a sellout, 90,000+ at Wembley, another team fighting for respect in their country and fighting for the right treatment, having an incredible run, and being able to galvanise their fans and their country behind them and feeling like this is a special moment for us to all come together and celebrate women’s football for all of the good that it is.”

Governing body US Soccer said it would move immediately to implement reforms following the release of the findings on Tuesday.

An investigation was launched last year after allegations made against North Carolina Courage’s English head coach Paul Riley, who was sacked.

Riley, who has coached women’s teams since 2006, has denied the accusations.

USA captain Becky Sauerbrunn said players were “horrified and heartbroken” by the findings, while winger Crystal Dunn told BBC Sport it is “hard to find the joy in playing”.

“It’s horrifying. Even when you know it, it’s just horrifying over and over to read,” said Rapinoe, who added women’s football is “already in a better place” than it was the day before the report was released.

“We’re angry, and exhausted, and together, and unified.

“It’s nice to be here together as a team, I feel like it’s really powerful for us all to be together as a national team and be able to speak on behalf of all of us.

“It’s really sad to say, but in a way, we’re used to having to deal with one thing or another. It seems to bring us closer and definitely unify the team.

“We’re used to taking on a lot, playing in these kind of conditions, and I think we are able to be on the field, to have not just a head coach but an entire staff that supports us fully on and off the field, where we can step on the field and do our job is something that I think is a safe haven for all of us.”

Lionesses and Arsenal star Mead said she was “sickened by the situation” when asked for her thoughts on the report.

“It’s a worldwide problem. Women need to be taken seriously. I’m very proud of the victims who stepped up and said it,” she added.

“Governing bodies need to be doing better, US Soccer needs to do better and worldwide we need to do better.”

England manager Sarina Wiegman said: “My first reaction was that it is horrible, unacceptable that it is still happening and I feel very sorry for all the victims.

“It should stop immediately. I think it’s a worldwide thing. We need to stop these things. It’s horrible.”

Friday’s friendly will be England’s first game against the US, who are ranked number one in the world, since they were crowned European champions in the summer.

Wiegman’s side then host the Czech Republic in another friendly on Tuesday in Brighton (20:00 BST).

‘At the time it was a scary situation’

England will be without captain Leah Williamson and striker Alessia Russo for the USA game after they were forced to pull out of the squad through injury.

West Ham defender Lucy Parker, who had received her first call-up to the squad, was also withdrawn after getting injured in their Continental Cup win over London City Lionesses.

Mead was substituted in Arsenal’s Champions League qualification round victory over Ajax last week after a head collision but has been declared fit to play.

There was frustration from Arsenal boss Jonas Eidevall after they were forced to play with 10 players after Mead’s injury because concussion substitutions are not allowed in the Women’s Champions League.

“I am fine now, I’ve done all the protocols, I am back in training. Obviously at the time it was a bit of scary situation,” said Mead.

“I thought the club did amazing with me and did the right thing taking me off the pitch. It’s such a serious injury, I think it’s a little bit disappointing [a concussion substitution is] not in place at the moment and something that they maybe need to look at.”