Reporter’s Notebook: The Truman Show at the Capitol

But what few Americans know is that President Harry Truman also took out Hamilton.

Hamilton wasn’t laid low in a duel. But congressional officials recently moved Hamilton’s statue out of the Capitol rotunda in exchange for a statue of the 33rd president.

Hamilton’s statue is now exiled to the Capitol’s “Hall of Columns,” a lengthy, ornate corridor on the first floor of the House wing.

Compared to the rotunda, the Hall of Columns is not exactly “the room where it happens.”

WATCH: THE LIFE AND TIMES OF HARRY S. TRUMAN

The congressional statue of former President Harry S. Truman is unveiled in the rotunda of the U.S. Capitol Building in Washington, Thursday, Sept. 29, 2022.
(AP Photo/Andrew Harnik)

In the Hall of Columns, Hamilton’s company isn’t quite elite as the roster of presidents which line the rotunda. Hamilton’s now in congressional steerage with a statue of Sen. Jacob Collamer of Vermont. Collamer was a prominent member of the Whig party and served as U.S. postmaster general. Nearby is a statue of Sen. John Kenna, D-W.V., who served in the Confederate Army. Finally, there’s a depiction of John Gorrie of Florida. Gorrie’s claim to fame is that he received a patent for a machine to make ice.

That’s one way to give Hamilton the cold shoulder.

Alexander Hamilton enjoyed something of a renaissance in recent years thanks to Lin-Manuel Miranda’s Broadway hit. But, as they sing in the musical, “Oceans rise. Empires fall.” And even Hamilton’s recent surge in popularity was no match when up against Truman and a coveted spot in the Capitol rotunda.

There are two exceptions. There’s a bust of Martin Luther King Jr. and a massive sculpture titled the “Portrait to Lucretia Mott, Elizabeth Cady Stanton and Susan B. Anthony.” It’s an homage to women’s suffrage.

But other than those figures, only the statues of presidents now stand in the rotunda. And as King George III proclaimed in Hamilton about other American presidents, “Next to Washington, they all look small.”

Politics dictates there’s no way they would remove King nor the women’s monument. So they dismissed Hamilton.

Each of the 50 states get to choose two statues to represent them in the Capitol collection.

Missouri’s legislature selected Truman as its statue, dispensing with an 1899 statue of late Sen. Thomas Hart Benton, D-Mo. Known as “Old Bullion,” Benton served in the Senate from 1821 to 1851. But the senator wasn’t even as famous as the painter who bore the same name. Like many statues officials have replaced in the Capitol in recent years, history passed Benton by. Benton also defended slavery. So it’s no surprise that the Show Me State showed Benton the door and opted for Truman. 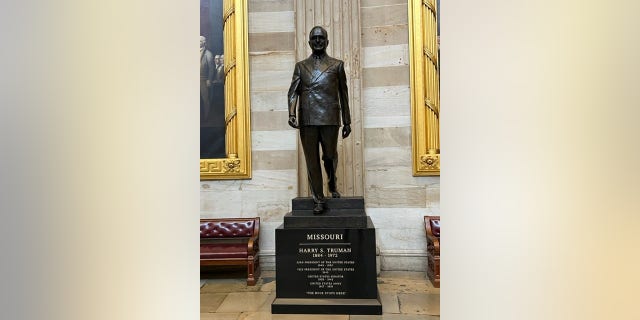 Benton’s statue never stood in the Capitol rotunda. His depiction resided in Statuary Hall, the old House chamber. So they traded Benton for Truman and Hamilton for Truman. As they say in Major League Baseball, Hamilton was “designated for assignment.”

And — click, boom — Hamilton was demoted from the Capitol rotunda to the Hall of Columns.

Down in the Hall of Columns, Hamilton’s edifice now stands next to a sculpture of late Sen. Pat McCarran, D-Nev. McCarran was a key figure in the creation of the U.S. Air Force. The airport in Las Vegas was named after McCarran until recently. Nevada officials renamed the airport after late Senate Majority Leader Harry Reid, D-Nev. McCarran co-authored the famous “McCarran-Ferguson Act.” The law created a carve out for insurance firms from federal regulations. But McCarran was also a notorious racist. There’s been chatter for years about swapping out McCarran’s statue.

Despite his downgrade, the 1868 statue of Hamilton might tell you he’s not “throwing away my shot,” much like the title character in the play.

Senate Majority Leader Chuck Schumer, D-N.Y., hinted he’d like to see Hamilton back in the rotunda. The New York Democrat conferred with Senate Rules Committee Chairwoman Amy Klobuchar, D-Minn., about the decision to switch out Hamilton for Truman. The Senate Rules Committee is one panel in charge of placement of statues in the Capitol.

There’s a line in the musical that is prophetic about Hamilton and the other Founding Fathers. It speaks to Hamilton’s relegation on Capitol Hill.

“You have no control. Who lives who dies. Who tells your story,” the chorus sings.

The hagiography of Washington, Jefferson and James Madison overshadowed Hamilton — especially since Aaron Burr cut his life short in the duel. Despite his presence on the $10 bill, Hamilton was banished to the back pages of U.S. history until Ron Chernow authored his biography in 2004. Miranda magnified Hamilton’s legacy from there with his Tony-winning musical in 2015.

Truman’s status as president certainly makes him worthy of his spot in the rotunda. Truman may be more connected to the Capitol than some of his colleagues. He served a decade in the Senate and — as President Franklin Delano Roosevelt’s vice president — was president of the Senate. In fact, Truman went from the Senate to vice president to president in fewer than three months after FDR died.

Vice presidents frequently presided over daily Senate sessions back in those days. Truman spent much of April 12, 1945 monitoring a Senate debate over a water treaty with Mexico. Toward the end of the afternoon, Truman wandered to a special hideaway office in the Capitol used by House Speaker Sam Rayburn, D-Tex. Rayburn often invited fellow lawmakers to join him in what was called the “Board of Education.” They’d discuss legislation over libations. Truman was Rayburn’s guest on that day.

But White House press secretary Steve Early interrupted their branch water and bourbon with an urgent phone call, asking Truman to return to the White House as quickly as possible. Truman didn’t know why at the time.

FDR had died and Truman was minutes away from becoming president.

Truman excused himself from the conclave with Rayburn and darted back across the building from the House wing to the vice president’s office on the Senate side of the Capitol. Truman had to collect his hat before he could leave. It was rare in the 1940s to see a man outside without his hat.
Ironically, en route to the Senate wing of the Capitol, Truman raced through the Hall of Columns and the very spot where Hamilton’s statue stands today.

Truman’s oldest grandson, Clifton Truman Daniel, spoke at the ceremony dedicating the statue of his grandfather in the rotunda.

“Do your duty and history will do you justice,” Daniel said.

It’s unclear if Hamilton’s downgrade to the Hall of Columns is permanent.

But Hamilton may take solace in a line sung by King George III in the musical.