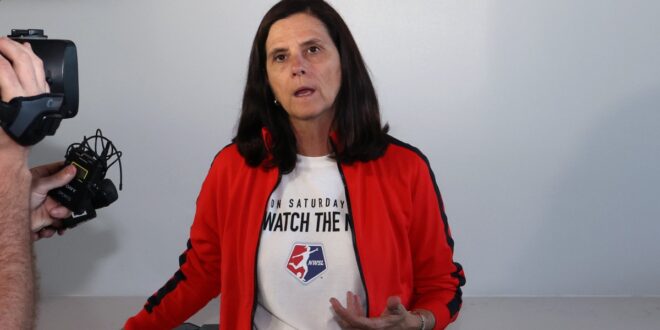 Former NWSL commissioner Lisa Baird said in a new interview that she acted in the best possible manner and did not ignore allegations of misconduct by former Portland Thorns and North Carolina Courage manager Paul Riley.

Appearing on the E:60 documentary Truth Be Told: The Fight for Women’s Professional Soccer, Baird made her first public comments since resigning from the position in October 2021. The interview with ESPN’s Lisa Salters aired Tuesday night on ESPN.

“Well, you know, I could second-guess myself a lot,” Baird said when asked whether she would have done anything differently. “I’ve had a lot of time to reflect on this. I’m sure there are things that I could do differently. I think, right now, I made the best decisions I could with the information I had at the time.”

Several of the NWSL’s players disagree with Baird’s assessment of her own handling of the allegations. In September 2021, The Athletic reported that former NWSL players Sinead Farrelly and Mana Shim came forward with stories of harassment and sexual coercion by Riley dating back a decade. The Thorns previously had fired Riley in 2015 after an investigation under then-commissioner Jeff Plush, but North Carolina was allowed to hire him shortly afterward.

Riley, who denied the allegations, was fired as the Courage’s coach after The Athletic’s report was published.

Baird issued a statement after the complaints about Riley’s behavior were made public, saying she was “shocked and disgusted to read the new allegations.” However, San Diego Wave forward Alex Morgan, who was with the Thorns when some of the incidents reportedly occurred in ’15, shared screenshots of an email exchange between Baird and Farrelly from April 2021.

“The league was informed of these allegations multiple times and refused multiple times to investigate the allegations,” Morgan wrote in a Twitter thread, which included screenshots of emails to Baird in April and May 2021 as well as the response from the commissioner. “The league must accept responsibility for a process that failed to protect its own players from this abuse.”

In her interview with Salters, Baird insisted she was not aware of the specific reports made about Riley before The Athletic’s article was published.

“That was the first time that I heard of an accusation of sexual abuse,” she said.

Morgan, who also was interviewed for the E:60 documentary, once again disagreed with Baird, calling what the former commissioner said “a lie.”

“I wanted so deeply for Lisa Baird to just stand up and say, ‘I’m sorry. I didn’t do enough,’ but she didn’t,” Morgan said. “She said she was shocked and disgusted, and that was surprising because that was a lie.”

After Riley was fired, the NWSL called off the weekend’s games. Baird said in a statement at the time: “This week, and much of this season, has been incredibly traumatic for our players and staff, and I take full responsibility for the role I have played. I am so sorry for the pain so many are feeling.”

A few hours after cancelling the games, Baird resigned.

“By that Friday, I had come to a very painful and very personal conclusion based on the reaction and based on social media, which was very painful,” Baird told Salters. “And it was that I felt like the thing that I could do was accept institutional responsibility. That would help the league weather the crisis. Listening to the players in my conversations that day, their pain really impacted me and influenced my decision, just hearing that.”

When asked why she took responsibility for the events that led to her resignation, Baird she was unsure.

“I can’t tell you,” she told Salters. “I don’t even remember clearly what happened in those 24 hours. You know, it’s a hard time to think. I mean, I don’t know that was written, right? It was written. It’s really hard for me to have clarity.

“I mean, my daughter got a threatening DM, and I was just trying to sort it all through at that time. So I think that statement came out around that time. I can’t clearly remember it. But you know, sometimes as a commissioner, and that is part of the role of the commissioner, is you take institutional responsibility. You just do.”

Baird’s interview aired just a day after an independent investigation commissioned by U.S. Soccer into the NWSL scandals found that emotional abuse and sexual misconduct were systemic in the sport, according to a report released Monday.

The investigation, helmed by former acting U.S. attorney general Sally Q. Yates and the law firm King & Spalding, found that abuse throughout the league was “rooted in a deeper culture in women’s soccer, beginning in youth leagues, that normalizes verbally abusive coaching and blurs boundaries between coaches and players.”

“In the spring of 2021, the NWSL received a series of four complaints about Riley in quick succession,” the report said. “The League largely ignored the complaints, and instead, weeks before the publication of The Athletic article, NWSL Commissioner Lisa Baird was actively trying to keep Riley from resigning over his anger about the postseason schedule.”

The report made numerous recommendations to prioritize player health and safety. Among them was a requirement that teams accurately disclose coach misconduct to the league and the soccer federation to ensure abusive coaches aren’t allowed to move between teams. It also calls for meaningful vetting of coaches and timely investigation into allegations of abuse.

U.S. Soccer said its board of directors and a leadership team would begin implementing the report’s recommendations immediately.

“U.S. Soccer and the entire soccer community have to do better, and I have faith that we can use this report and its recommendations as a critical turning point for every organization tasked with ensuring player safety,” U.S. Soccer president Cindy Parlow Cone said. “We have significant work to do, and we’re committed to doing that work and leading change across the entire soccer community.”

Previous Inter Milan 1-0 Barcelona: Xavi furious at ‘injustice’ in Champions League defeat
Next These celebs inspired people to push past their limits: poll