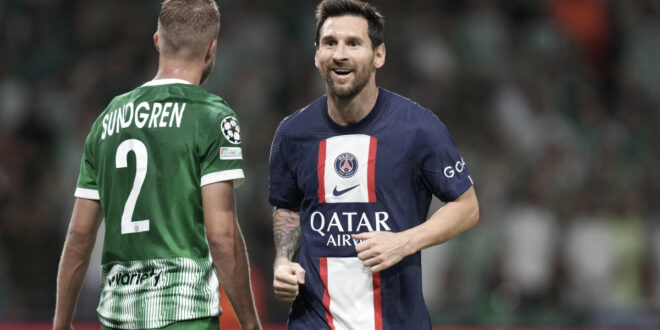 Messi Passes Ronaldo for Most Teams Scored on in Champions League

Cristiano Ronaldo may hold the all-time Champions League goal lead over Lionel Messi, but on Wednesday, Messi broke a tie with his rival for most teams scored against in the competition’s history.

The Argentine superstar added Maccabi Haifa to the list of clubs he has victimized in Europe’s premier competition, with the Israeli side becoming the 39th team to be on the wrong end of one of his goals.

In the 37th minute in PSG’s second group-stage match of the campaign, Kylian Mbappé sent a cross into the box that was deflected by a defender. The chance fell right to Messi, who pounced with a quick reflex to tie the game at 1–1 after Maccabi Haifa’s shocking 24th-minute opener.

For Messi, it was his 126th career goal in the competition, putting him 14 back of Ronaldo’s all-time record. The former Barcelona star has the chance to gain some ground on Ronaldo this season with Manchester United not competing in the Champions League.

The forward has now scored against teams from 18 different countries—he has scored the most goals (nine) against Arsenal.

Here is a full list of the clubs that Messi has scored against in Champions League throughout his career: