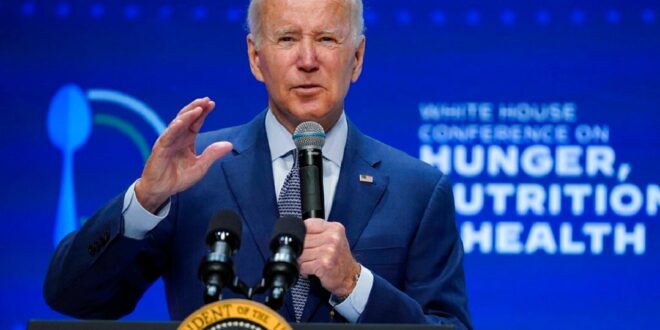 The head of Indiana’s Republican Party said Thursday that President Biden’s remarks in which he appeared to forget about the death of a congresswoman during a White House event “calls so much into question.”

Kyle Hupfer, the Indiana Republican Party Chairman, said people deserve an answer as to why Biden appeared to forget about the Aug. 3 death of Rep. Jackie Walorski.

“No amount of spin from the White House can justify President Joe Biden forgetting the tragic passing of Jackie Walorski — the latest gaffe that calls so much into question,” Hupfer said. “The American people deserve a straight answer, not a political talking point, as to how the President of the United States could forget that a congresswoman he was purportedly trying to honor had passed away just last month.”

President Joe Biden speaks during the White House Conference on Hunger, Nutrition, and Health, at the Ronald Reagan Building. During his remarks, he appeared to forget about the death of Indiana Rep. Jackie Walorski.
(AP)

Biden made his remarks during the White House Conference on Hunger, Nutrition and Health. Walorski, 58, a Republican, was one of four lawmakers who sponsored legislation pushing for the conference last year.

She died in a tragic car accident along with two of her staffers.

Biden was attempting to give her a shoutout during his speech.

“I want to thank all of you here, including bipartisan elected officials like … Senator Braun, Senator Booker, Representative … Jackie, Jackie are you here?” Biden said. “I think she was going to be here to help make this a reality.”

Since then, Republicans have called into question whether Biden is fit for office and have criticized the White House’s response to the incident.

“The president was naming the congressional champions on this issue and was acknowledging her incredible work,” White House press secretary Karine Jean-Pierre said. “He had already planned to welcome the congresswoman’s family to the White House on Friday. There will be a bill signing in her honor this coming Friday. So, of course, she was on his mind. She was top of mind for the president.”

Fox News Digital has reached out to the White House.