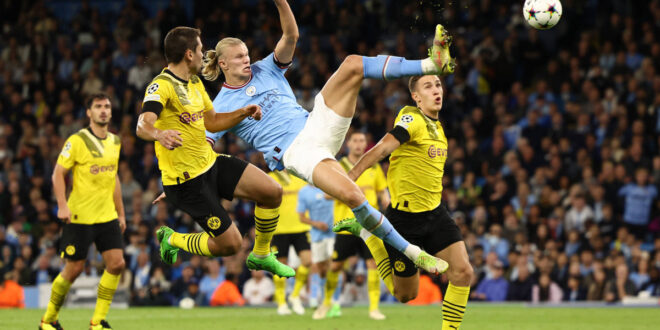 It was, in the end, about Erling Haaland, just as the narrative gods had intended it to be.

He did score the winner against his former club, but for a long time it had appeared that Borussia Dortmund would shock Manchester City Wednesday in the Champions League in the second high-profile reunion in the competition in as many days. It took 80 minutes for Man City to have its first shot on target, but two very different and brilliant goals ensured a 2–1 win and its second victory out of two games in the group stage.

Edin Terzić, perhaps, will regret removing a center forward in Anthony Modeste for a central defender in Nico Schlotterbeck—whose words in the run-up to the match regarding Haaland look quite foolish now—which invited late pressure. But still, it took a ferocious strike form John Stones to pull City level after 80 minutes, before Haaland’s 84th-minute goal. Perhaps João Cancelo should not have been given as much time as he was, but given the opportunity, he shaped in a perfect cross with the outside of his right foot, and Haaland acrobatically finished with a controlled head-high volley. He may have not celebrated out of respect for his old club, but it was a moment worth savoring.

Haaland’s start at Man City has been remarkable: 10 goals in six league appearances, as well as two in the 4–0 win over Sevilla in the Champions League last week. He has 26 goals in 21 Champions League matches in his career, and he’s just 22. For a long time Wednesday, though, the gears were gummed and City struggled to make an impression.

In terms of chances, the first half had largely been a non-event and it took 20 minutes of the second half for City even to begin to get going, by which time it was behind on Jude Bellingham’s header. Sluggish patches aren’t entirely unknown in the Champions League group stage for City, when there is perhaps less urgent to get all three points in every game, but still, coming after the surprising Premier League draw at Aston Villa, the drabness of the performance must have been a concern.

City, on its off days, can be a wasteful team, missing chance after chance, but Wednesday, billed as Haaland’s showdown vs. his former side, was more about the absence of chances. Stones’s goal was City’s first effort on target. Occasionally, Haaland threatened to create something for Jack Grealish cutting in from the left, but his efforts to work the ball onto his right foot were predictable enough to be blocked.

Generally, though, City was slow and ponderous, its bluntness only partly the result of Dortmund’s excellence defensively. Dortmund, of course, deserves credit for the way Mats Hummels handled Haaland, supported by a midfield that dropped very deep to deny City any creative space, but this was also about City.

When it lost 3–1 to Liverpool in the Community Shield, with Haaland missing two decent chances, there were a lot of questions about whether he could be as prolific in England as he had previously been in Austria and Germany. And to an extent that was fair enough—plenty of players have come from the Bundesliga with fine goalscoring records and struggled to score in the Premier League.

But the issue wasn’t really Haaland. He is a phenomenon, essentially unstoppable if he gets a run at a defender, almost impossible to outmuscle, and also a fine reader of the game with a tremendous capacity for a first-time finish. Thierry Henry said recently that he thought Kylian Mbappé was a better footballer because of his greater versatility and there is perhaps something in that: Mbappé can create and he can play wide.

But Haaland doesn’t care. He is like some creature brought to life at midnight in a tower during a storm, the result of some dangerous experiment to create the perfect goalscorer. If he has forebears, they are rare: the Brazilian Ronaldo, perhaps, before the injuries, Zlatan Ibrahimović, Eduard Streltsov or Bernabé Ferreyra, astonishingly powerful forwards who coupled that with great technical ability.

The issue was whether he could fit the Pep Guardiola system. A large part of Guardiola’s success over the past 14 years has been how his sides have controlled games. He has spoken of the need for his teams to have 15 passes to set themselves, to ensure they can attack without being vulnerable to the counterattack. But Haaland demands the ball quickly. What was striking about that Community Shield defeat was how often he made dangerous runs and the pass didn’t come.

Almost immediately, against West Ham on the opening weekend, that was rectified. But although Haaland has been scoring—and at a rate that suggests he will obliterate the Premier League goalscoring record—City has been open. It was two down against Newcastle and drew, then two down against Crystal Palace (and would have been three but for an effort that was bafflingly disallowed) before it fought back to win. The draw at Villa may have been the result of trying to reconcile the two, and so, too, perhaps, was this.

Schlotterbeck sorely discounted Haaland and the difference he can make in an instant when he uttered to German media, “I know how to stop Erling Haaland. We have to stop them (Manchester City) as a whole, Erling is the least of our problems.”

How untrue that wound up proving to be.

As for City, getting the balance right will be key to whether it can, at last, win the Champions League this season, but this win proved that, unlike previous iterations, it can win games despite having played poorly. Haaland gives it the potency to get away with disappointing overall performances.