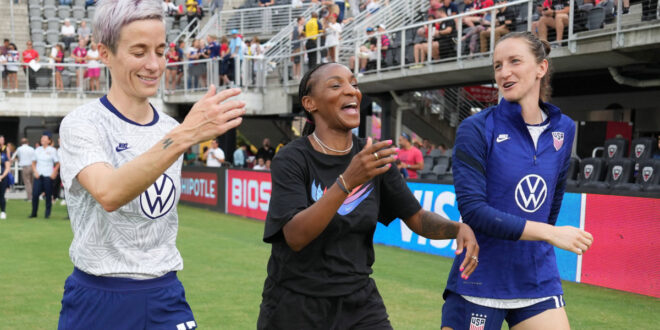 Anyone hoping for Alex Morgan to bust out the tea celebration at Wembley Stadium next month will be sorely disappointed.

The U.S. women’s national team forward, who famously celebrated a 2019 Women’s World Cup goal vs. England in that manner, has been left out of the U.S.’s trip abroad for friendlies against the European champion Lionesses and Spain with a knee injury. Crystal Dunn, who gave birth in May, and Alyssa Thompson, a 17-year-old forward, are among the notable inclusions for Vlatko Andonovski’s side, which will be tested by the two European teams in a big way as part of preparations for next summer’s World Cup in Australia and New Zealand.

“These are big tests for our team in front of crowds cheering against us and after long travel, but our players absolutely love games like these,” Andonovski said in a statement. “The group we are bringing to Europe includes players who have a lot of experience against top European teams and some that don’t, so these games are even more critical for our growth as our team. Our whole squad needs to get a clear picture of what these games are like as we continue to prepare for the World Cup.”

More than 80,000 fans are expected at Wembley for the Oct. 7 showdown vs. Sarina Wiegman’s England, which will shatter previous attendance records for a USWNT friendly. The second match, four days later in Pamplona, Spain, will come under significantly difference circumstances, considering everything swirling with the Spanish women’s national team. Last week, 15 players quit the team in protest of manager Jorge Vilda, who they claim has “significantly” affected their “emotional state” and well-being. Several U.S. players have backed their Spanish counterparts, whose federation has reacted defiantly, so anyone anticipating a full-strength and focused Spanish side (it already would have been missing the injured Alexia Putellas), will be left underwhelmed.

Nevertheless, there are the types of tests that plenty have been clamoring for, with the U.S. having rolled through a series of overmatched opponents and largely coasting through the Concacaf World Cup and Olympic qualifying tournament this past summer. England is ranked fourth in the world and coming off the high of its summer title, while Spain is eighth.

Dunn’s return continues her impressive and rapid comeback from maternity leave. She was with the U.S. in a training capacity during September friendlies against Nigeria but is on the active roster after returning to action in a small capacity for the Portland Thorns.

Morgan, meanwhile, will have to wait a bit longer to cross the 200-cap threshold. She’s on 198 and could have hit it had she been included on the roster. Instead, she’ll (presumably) sip tea at home while watching a young forward corps led by the in-form Sophia Smith and Mal Pugh attempt to pick up the slack against two of the better teams in the world just two weeks before the U.S. learns its group fate at the 2023 WWC draw.

Andonovski addressed Morgan’s injury on a conference call with reporters on Thursday, saying that he could not divulge the severity, but “if this was a World Cup final, Alex was going to be on this trip and was going to play, no question.”

Here’s the U.S. squad in full: