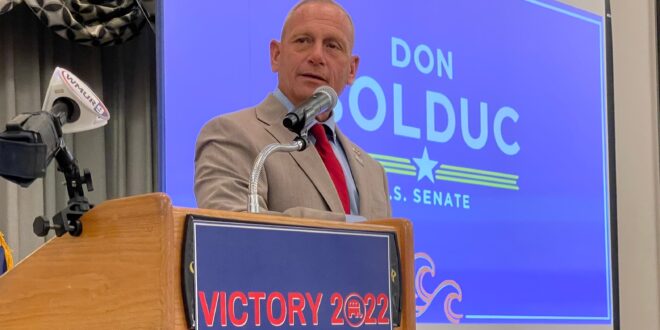 FIRST ON FOX: The leading super PAC supporting Democratic senators and candidates is taking aim at the Republican challenging Democratic Sen. Maggie Hassan this November in New Hampshire with a major ad blitz on the combustible issue of abortion.

The TV commercial from the Senate Majority PAC, which was shared first with Fox News on Thursday, spotlights a comment by former Army Gen. Don Bolduc, the GOP nominee in the small but crucial general election battleground state, where he praised the blockbuster move by the Supreme Court’s conservative majority to overturn the landmark Roe v. Wade ruling. Democrats have been targeting Republicans running in the midterm elections over the issue in the three months since the high court opinion sent the fight over legalized abortion back to the states.

The ad by the group aligned with Senate Majority Leader Chuck Schumer uses an audio recording of Bolduc, on the day of the June 24 Supreme Court ruling, saying “why don’t we just rejoice that one right now,” which elicited cheers from the conservative audience the candidate was addressing.

The spot also highlights a clip from Bolduc during a radio interview a couple of days later stressing that “you do not compromise on the issue of life,” as well an audio recording of Bolduc speaking at a local Republican committee meeting last December saying “I am not going to vote contrary to pro-life.”

The commercial ends with a video clip of Bolduc in a local TV interview saying “get over it” as he commented on Hassan’s full court press against him over the abortion issue.

CHECK OUT THE LATEST POLL IN NEW HAMPSHIRE’S SENATE BATTLE

Republicans view Hassan, a former governor, as vulnerable as she seeks a second six-year term in the Senate, in a race that’s one of a handful across the country that will likely determine if the GOP wins back the chamber’s majority in the midterm election. Hassan, on the campaign trail and in her ads, has been spotlighting the issue of abortion.

Hours after Bolduc narrowly won the Senate GOP nomination in New Hampshire’s Sept. 13 primary, Hassan’s campaign went up with a TV ad charging that “if Don Bolduc and Congressional Republicans take control of the U.S. Senate they would push for a nationwide ban on abortion — a ban with no exceptions.”

And the narrator in the new Senate Majority PAC ad claims that “Bolduc would give [Senate Republican Leader] Mitch McConnell the power to ban abortion nationwide.”

But Buldoc told Fox News immediately after capturing the GOP nomination that if he were in the Senate, he would not support a proposal, unveiled earlier this month by Republican Sen. Lindsey Graham of South Carolina, to implement a 15-week federal abortion ban.

“No, I’m not going to support it because it makes no sense. The Supreme Court has already decided that this is a state issue. The states have it. That’s where it needs to be. Women on both sides of the issue will getter a better voice at the state level,” Bolduc said. 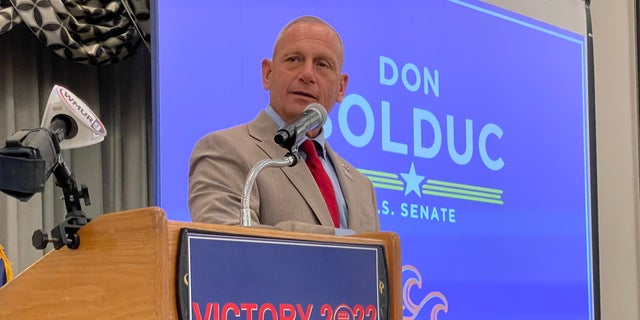 While this is the first time Senate Majority PAC has launched ads in the general election campaign in New Hampshire, it did meddle in the Republican Senate primary. The group spent over $3 million to run ads targeting state Senate President Chuck Morse, whom many Democrats viewed as a stronger general election candidate than Bolduc, who has struggled with fundraising during his 2020 and 2022 runs for the Senate.

Bolduc, who ran in the primary as a populist and an outsider, edged the more mainstream conservative Morse by a razor-thin margin in a crowded field of Republican Senate candidates.

New Hampshire is just one of the many battleground states where Senate Majority PAC is spending big bucks to launch ads. The group’s reserved nearly $140 million to run spots in the Granite State as well as Arizona, Nevada, Georgia, Pennsylvania, Wisconsin, and North Carolina.

The Senate is split 50/50 between the two major parties, but the Democrats control the majority thanks to the tie breaking vote of Vice President Kamala Harris, through her constitutional role as president of the Senate. That means the GOP needs a net gain of just one seat in November to win back the majority it lost when it was swept in Georgia’s twin Jan. 5, 2021 Senate runoff elections.