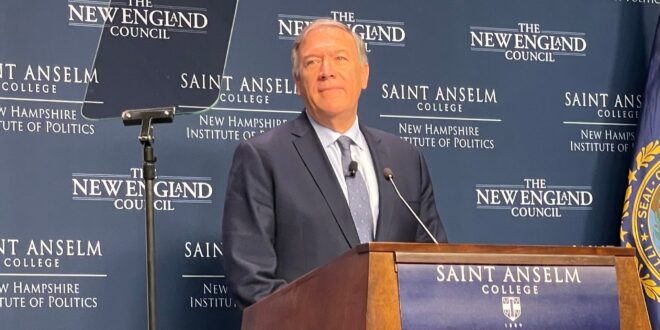 EXCLUSIVE: Former Secretary of State Mike Pompeo says he has a new mission – to battle what he terms is “a woke military.”

Taking aim at political correctness in the nation’s armed forces, the West Point graduate and Army officer who served in Germany during the Cold War is launching a campaign to target what he calls “woke polices” by President Biden’s administration that are directed towards the military.

The campaign, which includes a new website and two ads released by CAVPAC, a political action committee set up last year by Pompeo, was shared first with Fox News on Tuesday.

“American security, and the safety of our families, rests on the shoulders of our men and women in uniform. Their training must never be corrupted to advance left-wing political goals. This matters. A woke military is a weak military,” Pompeo, who was elected to Congress before serving as CIA director and America’s top diplomat during former President Trump’s administration, argued in a statement.

And he charged that “unfortunately, woke and weak are exactly the policies that President Biden is pushing on our troops. That’s why we must do everything we can to stop the spread of wokeness throughout our armed forces.”

The website – which can be found at TroopsSpeakOut.com – allows veterans and active duty service members “to shine a light on Biden’s woke polices”

Conservative politicians and pundits and opinion leaders on the right have railed since the start of the Biden administration at what they consider overzealous political correctness by U.S. military leaders. Top Pentagon officers have pushed back on such criticism that the military was becoming too “woke,” calling such accusations “offensive.”

Pompeo, in his ad, argues that “our military today is under assault from the radical left” and stresses that “If you’re a young kid sitting in a foxhole, you don’t give a darn about political correctness. If we focus on the wrong priorities, then Americans will be a lot less safe. We’ll use the right pronouns but what we won’t have is the capacity to keep our country safe.”

“I can assure you that there’s no Russian general, no Iranian leader, no Chinese Communist Party admiral, who’s spending one second thinking about gender or woke ideology, or climate change,” Pompeo argues. “They’re thinking about how to kill Americans and the fight is on. We have to walk away from this radical left ideology. We cannot let it penetrate our military.”

The new ads by Pompeo, a Fox News contributor who’s preparing for a potential campaign for the 2024 Republican presidential nomination, will run in Iowa, New Hampshire, and South Carolina – the first three states to vote in the GOP presidential nominating calendar – as well as in Washington D.C., according to a Pompeo adviser.

Earlier this month during a high profile stop in New Hampshire, Pompeo told Fox News “whether we’ll decide to get in the race and run for president, I can’t answer. But we are doing the things that one would do to be ready to make such an announcement and then to engage with the American people on the ideas that we believe matter.”