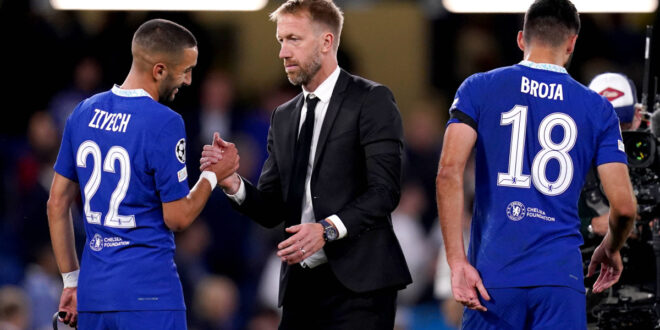 If Chelsea hoped that there might be an immediate bounce once Graham Potter had replaced Thomas Tuchel as manager, it was left disappointed. A slightly featureless 1–1 draw at home to Red Bull Salzburg leaves Chelsea at the bottom of its Champions League group after two games, and, with two matches against AC Milan still to come, facing the serious possibility of missing the knockout stage. Perhaps of more concern though, was that Wednesday’s was a performance just as disjointed as those of the past few weeks.

It would obviously be absurd to judge Potter after just one game—especially one during an abnormal week for the English game following Queen Elizabeth II’s death—but his side suffered the same issue as Tuchel’s often had, which was to enjoy a level of domination of midfield without much in the way of penetration in the final third. Here, at least, there was a bona fide center forward, the one brought in at Tuchel’s behest (although he never got to start him), in Pierre-Emerick Aubameyang. Not surprisingly, he looked rusty.

Kai Havertz was deployed behind him, which is surely his best position, with Mason Mount on the right and Raheem Sterling, who scored Chelsea’s only goal on a neat curling finish, on the left. But Sterling spent much of the game chasing back, operating almost as a wingback. He did not look especially thrilled to be replaced six minutes from time by Christian Pulisic and perhaps felt his attacking incursions beyond the striker had been needlessly limited. There is, it’s fair to say, work to be done.

Potter’s grand entrance was, anyway, to an extent overshadowed by the comments made by Chelsea’s owner Todd Boehly earlier in the week. He’s not the first owner to be taken by the idea of a multi-club model, something that has crept into football recently without a huge amount of comment, but that serves unhelpfully to cement inequalities within the game and the stratification of leagues. But what drew the most publicity was his idea of a Premier League All-Star Game.

It’s impractical to the point of unworkability, and the idea that it could generate $200 million for the pyramid is laughable (there actually has been a one-off showpiece friendly in English football to raise revenue for charity since 1908, the Community Shield, which is tolerated rather than loved. iIt’s a worrying indication of how Boehly sees the world that, rather than contemplating an equitable system for the distribution of revenue, or questioning how the rich became so much richer than everybody else, he would rather rely on philanthropic handouts to fund the smaller clubs, the definition of fat-cat hand-washing).

But what is probably of greater to concern to Potter is what it says about how Boehly regards football and how little he understands it. Football is not a game of individuals. Grab even the most naturally gifted 11 players on the planet, stick them together and the result will be a mess. Perhaps legendary Ukrainian manager Valeriy Lobanovskyi was exaggerating to make a point when he observed that what matters more than the individuals are the bonds between the individuals, but football is about the coalition.

That’s why international football looks so different to club football; national managers simply don’t have the time to drill their players in complex systems of pressing or sophisticated attacking patterns that we’re used to seeing at the club level. The international game, with occasional exceptions, is about getting the defense tight and hoping an individual forward can do something. Two teams of 11 individuals who have never played together before would result inevitably in miserable football—even before the lack of intensity and the terror of pointless injury is taken into account.

That Boehly could think such a scheme was worth mentioning reveals that he sees the game as being primarily about individuals, which perhaps explains why he was so keen to sign Cristiano Ronaldo (and Anthony Gordon and Roméo Lavia) even when they would have been such a poor fit for Tuchel’s system. And if this week’s interview at the SALT Conference in New York was indicative of the sort of WhatsApps Boehly was sending Tuchel, it’s perhaps not surprising the manager became reluctant to answer.

And that does not seem encouraging for Potter in the longer term. He is polite, studious and thoughtful. He is admirably open to fresh ideas, as his stints with the Ghana women’s team and the Swedish team Östersund show. But his sides have always had an internal coherence. He has worked on tight budgets and, by securing player buy-in, created balanced, intelligent teams that have overperformed based on their resources. Now he has the resources, but securing the buy-in will be trickier given the egos of better-remunerated players.

The ego of an owner who doesn’t understand that football is primarily a systems game may be an insurmountable hurdle.