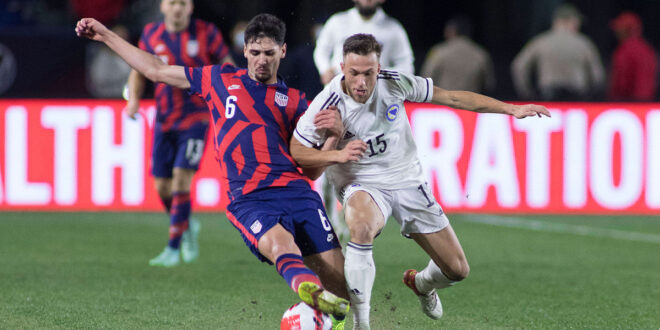 A minor injury to Yunus Musah has opened the door for another U.S. international midfielder to have the chance at a final World Cup audition.

Johnny Cardoso, the 20-year-old playing at Brazil’s Internacional, will replace Musah in the upcoming camp, which is the last gathering the U.S. will have before the World Cup squad is announced. Musah’s groin injury was confirmed by Valencia manager Gennaro Gattuso and then U.S. Soccer on Friday, with the player remaining with his club to rest and recover instead of leaving for the international break. He has been in fine form in La Liga, starting all five of the club’s matches.

As a result, Cardoso joins a midfield group that includes Tyler Adams, Weston McKennie, Luca de la Torre, Kellyn Acosta and Malik Tillman. Berhalter briefly mentioned Cardoso among other players on the cusp of the U.S. team when speaking with reporters on Wednesday, following the initial release of his squad.

“Johnny Cardoso is playing every week in Brazil, and we like what he’s doing. His team’s doing really well,” Berhalter said.

Cardoso’s last cap with the senior national team came in Dec. 2021, in a friendly vs. Bosnia-Herzegovina that took place outside of the FIFA international calendar. He participated in the U.S.’s futile Olympic qualifying campaign in March 2021 as well, and prior to that he came off the bench in a pair of Nov. 2020 friendlies, including one against the U.S.’s first World Cup opponent in Qatar, Wales. He did not take part in World Cup qualifying but now finds himself with a unique opportunity less than two months before final World Cup rosters are due to FIFA.

The U.S. will face Japan (Sept. 23) and Saudi Arabia (Sept. 27) in its last two matches before a World Cup group stage that includes games against Wales, England and Iran. The camp will take place in Germany and Spain and commence Sept. 19.

Previous Jonny Evans: How ‘making up the numbers’ in training set NI defender on course for 100 caps
Next ‘House of the Dragon’ just revealed the show’s Littlefinger