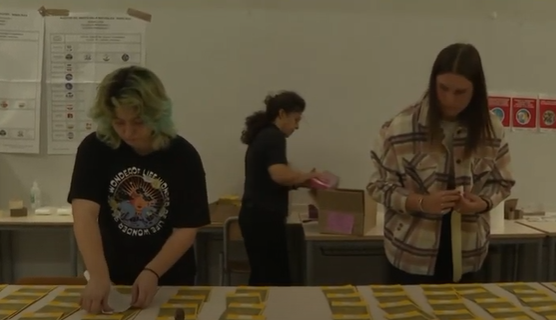 Public spaces in Italy, such as schools, are turning into a polling station this Sunday as millions of Italians will elect for the new parliament.
Here, I’m standing in front of one of the building that will be used for national elections, as we know that Prime Minister Draghi government has been collapsed, primarily due to the question from the right wing party about the Italy stability.

Voters will receive two ballots one pink for the Lonber vote and one yellow for the Senate vote. Since the last election, reforms have been passed aimed at streamlining parliament and making its operation less costly to taxpayers. In the upper chamber, the number of senators drops from 315 to 200, while the lower chamber of deputies will number 400 instead of 630. As Europe reels from the repercussions of Russia’s war in Ukraine, the election is being billed as a crucial vote for the first time in Italy since the end of World War II. It could propel a Farright leader and a woman into the premiership, such as Georgia Maloney, whose brothers of the Italy party have led opinion polls. According to Quorum new transponder Giovanni Diamanti said 55% of the right wing supporters will vote for Giorgia Melanie, while 54% of the center left wing supporters will vote for Mario Draggy.

Given the country’s fractured political spectrum, no single party sense much chance of winning enough seats to govern alone, so it could take weeks to build a ruling coalition. Electoral alliances are vital in how feeds are divvied up. The Central Solid campaign pact has the edge since the rival center left forces failed to forge a united camp.