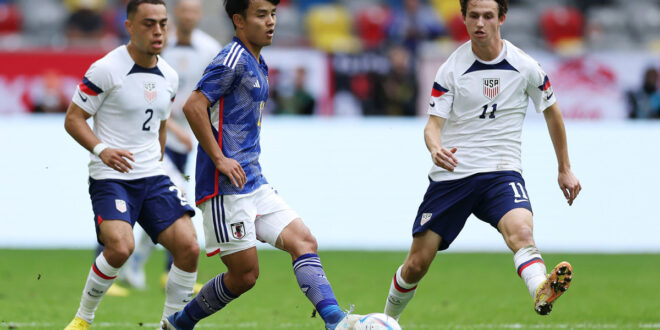 Entering this month’s camp, with two games to go before the World Cup, the U.S. men’s national team was seeking to fine-tune things in its preparation for the 2022 World Cup. And after the first of those two games, it appears plenty more fine-tuning is going to be required.

Japan scored early and remained on the front foot in Germany, where Gregg Berhalter’s side fell to another Qatar-bound team, 2–0, Friday at Düsseldorf Arena. Daichi Kamada and Kaoru Mitoma accounted for the goals, while the U.S. failed to put a shot on target over 90 disjointed minutes.

It was already known that the U.S. was not going to be at full-strength, with a number of key players—Tim Weah, Yunus Musah, Antonee Robinson, Chris Richards and Zack Steffen among them—not available for this match and this camp in general. One of the top stars actually in camp, Christian Pulisic, was a scratch for the game, though, having picked up a knock in training earlier in the week. He is considered day-to-day by U.S. Soccer and could feature on Tuesday against Saudi Arabia in Spain, the last match the U.S. will have before opening group play in Qatar on Nov. 21.

As a result, opportunity has opened up elsewhere, and Berhalter had confirmed prior to the match that goalkeeper Matt Turner and left back Sam Vines would be among those getting the starts. Turner was sensational in goal, making a number of key stops to keep the U.S. in the match, at least until Mitoma put it away in the 88th minute.

The other intrigue was up top for the U.S., where Jesús Ferreira, Josh Sargent and Ricardo Pepi are the forward picks for camp despite Jordan Pefok’s scorching form with Union Berlin. Ferreira got the first crack among the trio, getting the start at striker, while Sargent eventually came in off the bench.

Foreshadowing for how the match was going to unfold was evident in the opening minute. Turner was forced into an immediate save after a turnover in midfield, with Junya Ito swooping in, driving forward and launching a low, long-range effort on target.

The U.S.’s first opportunity came at the seven-minute mark, and it’s one that Ferreira really should have converted. Sergiño Dest delivered a pinpoint cross from the right, and the unmarked FC Dallas forward sailed his point-blank header over the bar.

On the other side, another giveaway forced Turner into action again, with Kamada getting a clear look from in close, only for the U.S. goalkeeper to hold his ground and parry it to safety.

There was nothing Turner could do to deny Kamada in the 25th minute, however. Another giveaway resulted in another chance, and while the Eintracht Frankfurt midfielder’s goal was initially ruled offside, a VAR review caught him level with the U.S. back line, resulting in the goal being given.

The rest of the first half unfolded largely like what preceded it: U.S. inability to play out of pressure and Japan appearing the superior squad, despite (like the U.S.) not featuring a full-strength side. Despite a playing surface that was perhaps not conducive to smooth performance, the Japanese had little problem dictating the terms of the opening 45 minutes.

The U.S. made four changes at halftime in hopes of altering its fortune—and also likely as part of a pre-planned rotation—with Josh Sargent, Jordan Morris, Mark McKenzie and Reggie Cannon coming on in place of Ferreira, Gio Reyna, Aaron Long and Dest.

The changes put the U.S. in more of a 3-4-3 and made a positive impact in terms of stabilizing the team’s overall play, but it resulted in little in the way of finding an equalizer. And it was Japan that had the first quality chance of the half, taking advantage of a U.S. caught in transition. Again, it was Kamada on the end of the chance, and again, it was Turner getting down and making the diving save to prevent the scoreline from being worse.

The U.S. made its final changes after that, with Weston McKennie and Luca de la Torre exiting the midfield, and Malik Tillman and Johnny Cardoso, a late injury replacement for Musah, coming on.

But Japan remained on the front foot, and it was Turner again coming to the rescue at the 75-minute mark, with the goalkeeper making an acrobatic save to get a finger on Ritsu Dōan’s blast from the edge of the box.

With Turner keeping the U.S. within reach of securing a result, the equalizer nearly came in the 81st minute, with Brenden Aaronson narrowly missing on a curled chance from the top of the area.

Japan put the match out of reach in the 88th minute on a sensational effort from Mitoma. The winger cut in from the left after taking on Cannon and beat Turner with a confident finish to make it 2–0 and cap the scoring.