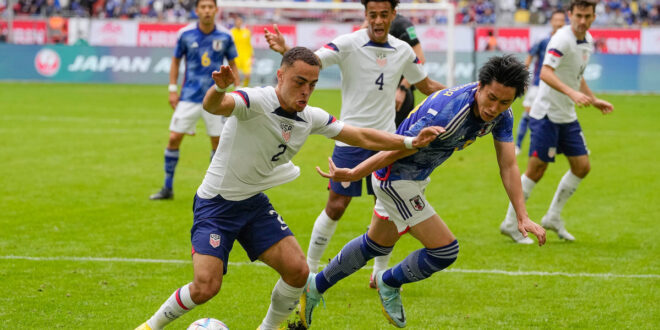 A Friday friendly that kicked off uncharacteristically early in the U.S. proved to be a sobering, and perhaps useful, wake-up call for the American men.

Gregg Berhalter wants his young team to play aggressively and direct, pressing the opposition into mistakes and then capitalizing with quick runs and passes behind the defense. He wants the field tilted, and to that effect, he has said repeatedly that he plans to deploy a high back line in Qatar. He expects to be on the front foot.

Sometimes, however, the opponent has other plans. Faced with a smart, energetic Japanese side that refused to allow the U.S. to establish a foothold or play to its strengths, the Americans crumbled and were easily beaten, 2–0, at the Merkur Spiel-Arena in Düsseldorf, Germany. The U.S. committed a rash of turnovers and didn’t manage a single shot on goal in what was its worst performance under Berhalter since the World Cup qualifying loss in Panama last October. That game featured a heavily rotated squad playing in oppressive humidity. On Friday in Germany, the Americans were simply poor.

“I think we ended up hurting ourselves a little bit too much in the game with silly giveaways,” Berhalter told ESPN following the game. “Give Japan a lot of credit. Good team, competitive team, they pressed well. But we can do better.”

During a first half that set the tone for Japan’s dominating win, the Americans lost possession in their own half a jaw-dropping 54 times. That’s the most since Berhalter took over in 2019, according to TruMedia. Starting center backs Walker Zimmerman and Aaron Long, who’ve been the favorites to start in Qatar, were challenged by Japan to orchestrate the build-up. Both struggled. The midfield was sluggish and unable to maintain possession or transition into the attack, and the front three posed no vertical threat and was largely silent. Striker Jesús Ferreira missed the best chance the U.S. managed to create, heading a high cross from right back Sergiño Dest well over the crossbar.

There’s just one game to go—Tuesday’s friendly against Saudi Arabia in Murcia, Spain. Berhalter plans to unveil his 26-man World Cup roster Nov. 9, and the team will begin training in Qatar five days later. The Americans open the World Cup against Wales on Nov. 21.

It’s easy to focus on that game, and the following high-profile tilt against England, as the matches that’ll make or break the U.S. in November. Modern global football culture being what it is, teams from the dominant continents of Europe and South America will be the more feared and familiar. That’s understandable to an extent—only two of the 84 all-time World Cup semifinalists have come from beyond those two renowned regions. But if anyone attached to the U.S. believes that unheralded Iran, the opponent in the group-stage finale, will represent an easier outing, Friday’s display should obliterate that notion. Iran (No. 22) is ranked higher than Japan (No. 24), which clearly outclassed the Americans.

The U.S. is moving beyond the Concacaf comfort zone, and it’ll have to adjust.

Perhaps that’s the silver lining to the defeat in Düsseldorf: it’s not just the big names that can play. Although the U.S. was missing a few likely World Cup starters—winger Christian Pulisic was ruled out Friday with a mild injury suffered in training, while left back Antonee Robinson, midfielder Yunus Musah and winger Tim Weah are unavailable this month—Japan didn’t start its most experienced XI either. Nevertheless, its energy and coordinated pressure were too much for the U.S. to handle. Turnovers by Long and Zimmerman led to a couple Samurai Blue chances in the opening 10 minutes, and Japan would score the only goal it needed in the 24th minute following an awful midfield giveaway by Weston McKennie. Dest was too far forward and couldn’t recover, the center backs were sucked toward the ball and Eintracht Frankfurt’s Daichi Kamada was all alone on the left side of the penalty area for an easy curling finish.

“Really disappointing. It was a really competitive game for a friendly match and I just kind of wish we had a little bit more bite about us from the start. I think we hurt ourselves in a lot of ways,” U.S. goalkeeper Matt Turner told ESPN. “They probably deserved to win this one.”

Substitutes changed the complexion of the game, as happens in all friendlies, and the Americans had a couple of improved spells in the second half as Josh Sargent and Jordan Morris finally forced the Japanese back a bit. But Brenden Aaronson’s late, hopeful bid from the top of the penalty area, which sailed high, was the most promising look. Japan notched its well-deserved second in the 88th minute when substitute Kaoru Mitoma, who plays for Brighton & Hove Albion, beat Reggie Cannon and Tyler Adams on the dribble before whipping a shot past Turner.

While Friday’s defeat raised concerning questions about how the U.S. might handle a fit and skillful opponent that’s proactive, pressing and aggressive, it also may have helped Berhalter answer one. Despite the two goals, Turner was outstanding. He made six saves, a couple of which were spectacular, and couldn’t do much on the occasions he was beaten. To this point, it appears the time training at Arsenal—he’s played just one game for the Gunners—hasn’t eroded his sharpness.

“One day at a time. Stay healthy. Any time I have the opportunity to play a game, play well, play consistently, and show people the growth that I’ve had in my game,” Turner said of his approach following the loss. “I think I’ve come a long way in the 2–3 months I’ve been at Arsenal. Overall I just want to show that I’m out there to compete. I’m really, really proud and grateful for every opportunity that I have to represent this country.”

Turner looks good to start in Qatar, whether the rest of his team is ready or not.