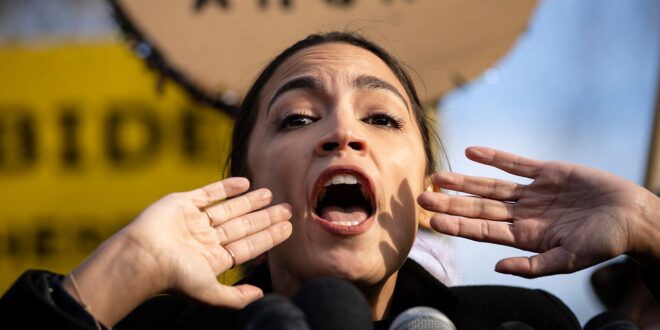 AOC says young people not having children because of ‘burdens of capitalism,’ more immigration is the answer

Rep. Alexandria Ocasio-Cortez suggested that more immigration is a solution to declining birth rates in the United States as people suffer “under the burdens of capitalism.”

The firebrand Democratic representative from New York took to Instagram to express her dismay that young people aren’t having kids and offered a solution.

Rep. Alexandria Ocasio-Cortez, D-N.Y., speaks during a rally for immigration provisions to be included in the Build Back Better Act outside the U.S. Capitol, Dec. 7, 2021 in Washington.
(Drew Angerer/Getty Images)

“There are quite a few countries that are really struggling because young people, under the burdens of capitalism and living in a society that is increasingly concentrating wealth among the rich, we’re not having kids. Or we’re not having kids at the same rate,” Ocasio-Cortez said. “And we actually need immigrant populations to help balance things out. We can’t continue to fund social security, Medicare, all of this stuff without immigrants. And it’s always been that way. Don’t act like this is some new trend or anything like that.”

Immigration and the number of immigrants that make up a percentage of the U.S. population have been rising since 1970, according to U.S. Census Bureau data compiled by the Migration Policy Institute.

Immigration is at the top of the ticket this November as a record number of illegal immigrants continue to cross the border.
(John Moore/Getty Images)

Fox News Digital reached out to Ocasio-Cortez but did not receive a response.