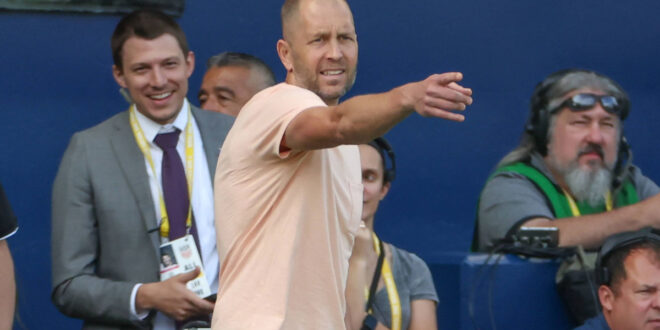 Gregg Berhalter saw it coming. But then again, anyone who has been closely following the U.S. men’s national team for the last few years probably should have, too.

“A lot can change,” Berhalter prophetically said regarding his penultimate squad choice before the World Cup begins, specifically about those who were and were not selected. “We have to be monitoring these players, we are monitoring these players, we’re having ongoing conversations with guys in the camp and not in the camp, because we know things can change really quickly.”

And so it has. In the time since Berhalter made those comments, last Wednesday, three of his 26 initial choices for the last U.S. camp—Yunus Musah, Chris Richards and Cameron Carter-Vickers—have withdrawn with fresh injuries. Another handful wasn’t available to be called on in the first place due to either lingering or recent injury issues. Such is what resembles “normal” for the USMNT.

It bears repeating that the U.S. has never had what most would consider its optimal lineup together for a single game in the four years leading into the 2022 World Cup. Injuries, COVID-19, form, discipline … you name the circumstance, and it has prevented the U.S. from truly being at full strength even once in Berhalter’s time as coach. So it should be no surprise, then, that the U.S., which has commenced its last camp before the World Cup, is again braced for change. It’s been the only real constant for a group that has achieved plenty as an extended unit and goes into its World Cup group against Wales, England and Iran feeling optimistic about its chances, regardless of who makes the final cut.

A camp that spans time and a pair of matches against World Cup–bound foes in Germany and Spain, is the next checkpoint on the road to Qatar, but it’s not the end-all for those hoping to reach the World Cup stage. Berhalter made sure to stress that point repeatedly, with it extending both ways—just because someone was called into camp doesn’t necessarily mean he’s a shoo-in for Qatar, and, conversely, just because someone wasn’t included doesn’t mean his World Cup hopes are toast. But there is going to be the expectation for the next men up to rise to the occasion if called upon. In this case, it’s the three replacements: Brazil-based midfielder Johnny Cardoso, and Europe-based center backs Mark McKenzie and Erik Palmer-Brown.

“It’s important to keep in mind that this is not the final roster. It’s not the final roster for the World Cup. A lot can happen between now and Nov. 9 [when the U.S.’s squad will be revealed]. A lot can happen between the ninth and the 14th [when FIFA’s roster deadline actually is]. So just keep that in mind. That was the conversation I had with the players not selected in this camp, is that a lot can happen in some of the positions where we’re looking to evaluate certain guys that we don’t have enough information on and other players just weren’t selected.”

So that’s the position in which the U.S. finds itself with one week and two games left before any undecided places—that 20% or so that Berhalter referenced—come down to remaining club performances (Berhalter did add that a separate, off-calendar camp for MLS-based players whose teams don’t make the playoffs will be held next month). In addition to the three aforementioned injuries, winger Tim Weah, left back Antonee Robinson and goalkeeper Zack Steffen, three players whom most would call core fixtures for a team familiar with flux, all were held out as well.

Steffen’s absence is made a bit more confusing considering he returned from a knee injury for Middlesbrough over the weekend, but it opens the door for Matt Turner to make his claim for the No. 1 job.

“We’re waiting to see how [Steffen] recovers and gets back on the training field and then a game field,” Berhalter had said last week.

Nevertheless, he remains out. Weah is also in a waiting game, with his ankle injury preventing him from playing for Lille at all so far this season. At the very least, Robinson’s injury does not appear to be prohibitive. The instrumental fullback injured his ankle against Tottenham earlier this month, but Berhalter appeared to play down the severity when giving his assessment last week, and that was backed by subsequent words from Fulham manager Marco Silva.

“It’s not really serious, and because of that we are testing every day how he feels,” Silva said late last week, before Fulham’s match vs. Nottingham Forest. “It’s something that could be one or two days, [that’s] the feedback that I received from the medical staff. We need to check again, because he doesn’t feel really comfortable yet, but I think soon we will have Robinson again.”

That’s a breath of fresh air for the U.S., which has options, but not ones that would be characterized as fully secure, behind Robinson in the pecking order.

The roster churn over the last few days doesn’t account for all of the pressing story lines with the current U.S. squad. The chief focus is on the center forwards, which, at this camp, are Jesús Ferreira, Josh Sargent and Ricardo Pepi. Ferreira’s form with FC Dallas and most recent contributions with the U.S. made him an automatic call, while Sargent has been on a scorching scoring run—at last—for Norwich City and has a deep history with this player pool. Berhalter said he didn’t want to bring four players at the position to camp when getting game time for all would have been a tough task, leaving the final call, presumably, down to Pepi and Jordan Pefok.

Whereas Pepi, who finally broke his scoring drought for club and country after more than 11 months with a goal in the Netherlands for Groningen, made the squad, Pefok, who has scored regularly for Bundesliga-leading Union Berlin, including another goal Sunday, did not. Both players’ goals were scored on headers, with Pefok’s of a higher degree of difficulty, in a better league—the same league where Pepi struggled to find a foothold.

Even so, the thought process is not that simple. Pepi is getting another look, perhaps owing to what he meant to the group during qualifying, with his three goals last fall helping propel the U.S. during a turning point. Berhalter was also quick to point out that Pepi was a starter in the final qualifying window. It’s not as if he hasn’t been more involved in key moments, and when contemplating what a team will look like in Qatar, more than stats go into it. Pefok’s goals speak for themselves, and he’s done just about everything he can to show he should not only go to Qatar but perhaps play a significant role, but he won’t get that last audition. And he might not need it, anyway.

“We’re pretty confident we know Jordan’s profile, we know what he can do,” Berhalter said. “And we didn’t feel like we needed to see him in this camp to determine whether he can be on the roster [for the World Cup] or not.”

If there’s one thing that can ease Pefok’s mind, and that of anyone else who is on the fringe but wasn’t called in for this camp and matches against Japan and Saudi Arabia, it’s Berhalter’s four words that represent what’s possible in a small time window.