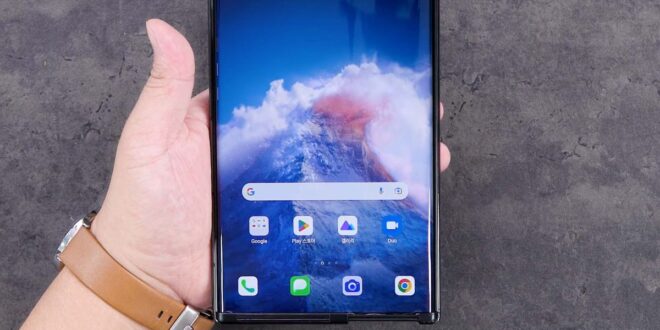 More than a year after LG unceremoniously exited the smartphone business and abandoned plans to release a rollable smartphone, a lengthy hands-on video has given us a comprehensive look at the unreleased device. LG’s rollable cropped up in a short clip earlier this year, but this new video is far more comprehensive, showing off the phone’s design and features from every angle.

What I find most surprising is just how finished the device looks. Although LG had said it wanted to release it before the end of 2021, I’d always assumed this was an ambition rather than a concrete plan. But this hands-on video appears to show a device that’s almost ready to be shipped to stores, complete with final-looking retail packaging and a case accessory. XDA Developers notes that LG is thought to have sold its remaining rollable prototypes to its employees, which might explain where this device came from.

Of course, the main draw here is that screen, which measures 7.4 inches corner-to-corner while fulled extended, and shrinks down to 6.8 inches when rolled. The unrolling mechanism looks similar to the Oppo X 2021 concept phone I got to try out last year, with the frame of LG’s phone gradually expanding to unfurl its flexible OLED screen. But in the case of the LG, there’s also a visible display on the back of the device, which looks like it can show notifications.

LG’s phone seems to use a relatively powerful motor to unfurl its screen, with this hands-on video showing how it’s strong enough to push a small pile of books across a desk. But it’s not perfect — there are some visible wrinkles on the right side of the phone’s screen while unrolled. It’s also unclear how durable the display is, or how many rolls and unrolls it’s able to withstand. Rival smartphone manufacturer Oppo told me it wanted to reach a rating of 200,000 rolls before it turned its prototype into a consumer device, and it’s unclear how close LG got before canceling the project.

The video also reveals that the circle on its back that some previously thought was a third camera sensor is actually a fingerprint reader, which sits beneath a 64-megapixel main camera and 12-megapixel ultrawide. Another fun detail is that the phone’s SIM card slot is hidden on the back of the phone, and gets revealed when the phone unrolls. Internally the device is reportedly powered by Qualcomm’s Snapdragon 888 processor (its flagship the year the device would have released), with 12GB of RAM, 256GB of storage, and a 4,500mAh battery.

Although LG’s smartphone division is no more, enough companies are working on rollable devices that there’s a good chance of one of them making it to market eventually. As well as the Oppo prototype mentioned above, TCL and Samsung Display have also expressed an interest in the technology. Actual handheld consumer devices with rollable screens are yet to be announced, but it feels like only a matter of time before one of them cracks it.