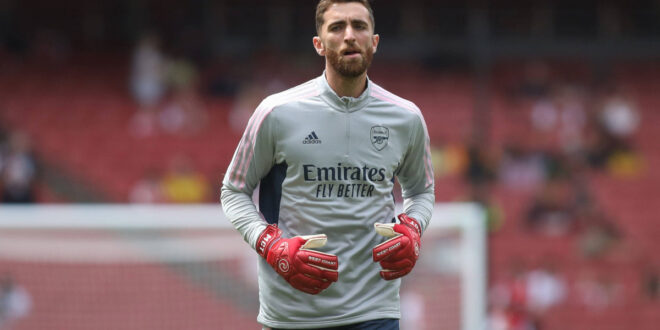 For the first time representing his new club, Matt Turner entered a U.S. men’s national team camp getting a version of the question that one of his compatriots and his chief competition for World Cup minutes has heard for quite some time. It goes something like:

Can you really stay in form and sharp if you’re not getting regular matches?

That question had been lobbed at Zack Steffen for the last two years, as he deputized as Manchester City’s backup while also continuing to start with regularity for the U.S. And although Turner rose to prominence and the U.S. stage by playing for the New England Revolution, where he emerged as a star in MLS, he left those confines, like Steffen before him, for the cauldron of a Premier League Big Six side. Now at Arsenal, Turner is backing up England international Aaron Ramsdale, and game time is predictably limited. He’s made one competitive appearance over the first month of the season, against FC Zürich in the UEFA Europa League, and as the World Cup beckons, the concerns over his readiness for the grand stage are growing.

But like most shots Turner faces, he was prepared, saw what was coming and had an emphatic answer.

“It depends on how you approach training, I’d say,” Turner said Monday from Cologne, Germany, where the U.S. is training ahead of friendlies vs. fellow World Cup–bound sides Japan (Friday) and Saudi Arabia (next Tuesday). “If you’re in it just to stroll about and you don’t think that you can change your situation no matter what you do, then you’ll lose a lot of that sharpness. But I don’t know how much you know about me or my story, but that’s not really the kind of way that I operate. Every single day I go to training, I’m going to try to get better to try to learn and improve and try to get myself onto the field. It depends on how you look at your situation and view your comfort levels, and for me I want to continue to get better. I know that my ceiling has not yet been reached, and it’s going to take some hard work, obviously some risky career moves at the end of the day, but if I want to get to where I want to get to, I need to get outside of my comfort zone a little bit, and that’s going to help my sharpness every single day and my approach to the game in general.”

With Steffen out of the current camp after recently missing time with a knee injury—he did return to action for Middlesbrough, where he had been getting that mythical regular game time, on Sunday—the 28-year-old Turner is the top candidate to start, and in doing so could take a step toward cementing his status as the U.S.’s World Cup No. 1. Ethan Horvath (Luton Town) and Sean Johnson (NYCFC) are the other goalkeepers in camp, and while they are featuring regularly for their clubs, neither has the same U.S. cachet as Turner, and both are more realistically vying for the third goalkeeper spot on Gregg Berhalter’s 26-man squad in Qatar.

After answering similar questions about Steffen during his backup seasons at Man City, Berhalter also came prepared to discuss Turner’s situation. And perhaps going through something similar with one goalkeeper has offered guidance on where to look to assess development and form for another when the game film is lacking.

“I had a chance to sit down with Arsenal‘s goalkeeper coach and talk to him about Matt’s development, Matt’s progress. We got to look at some video and see what his starting point was and where he is now,” Berhalter said last week. “And I think he’s made a ton of progress. I got to see training, see him defending shots against guys like [Bukayo] Saka and some more of their talented attacking players. So I think that he’s in good form and he’s in a decent spot.

“Would I like him to be playing every week in the Premier League? Yes. But that’s not the case.”

Hearing Berhalter and Turner discuss the current situation is akin to hearing Steffen discuss his two years ago. Comments strike similar notes, positives are accentuated and the outlook remains optimistic, with the downside, while acknowledged, being vehemently countered.

“My game has come a long way since I began at Arsenal,” said Turner, a Gold Cup champion and 2021 MLS Goalkeeper of the Year. “I’d say really, just the speed and intensity of everything, every single day. Mikel [Arteta] doesn’t accept anything except full gas at training sessions, so you have to bring it every single day, or else you get found out pretty quickly out there on the pitch.

“I think the big thing for me was I had a meeting recently with my goalkeeper coach where we looked at videos from my first few days of training, and then videos from my last few days of training, because I think it’s easy for us to get caught up in the moment,” Turner continued. “But looking back then to now, the difference in a goalkeeper that I am is huge. I’ve changed massively and I’m looking forward to representing the country again and having these opportunities to hopefully show everybody else as well.”

And everyone invested in the U.S.’s success in Qatar is eager to see it. Show well, appear calm and focused and run a tight ship, and the questions surrounding Turner, and the position as a whole, will quiet down a bit. Struggle, make uncharacteristic mistakes and plant seeds of doubt, and the position that has traditionally been a strength for the U.S. on the World Cup stage will remain a massive question mark in the final days leading into the competition.

“Like any player, we’ll evaluate their body of work, we’ll evaluate what they’re doing at their clubs and what they’ve done for us in the past and we’ll assess it when the time comes,” Berhalter said about his goalkeepers. “Overall, I think it’s something that we just are dealing with, and we’re going to give them the confidence and we’re going to put them in the best possible position to perform well for us. And Matt’s a guy that has done it before in tournaments. Ethan’s done it before and so has Sean, and Zack, without question, has done it before.”