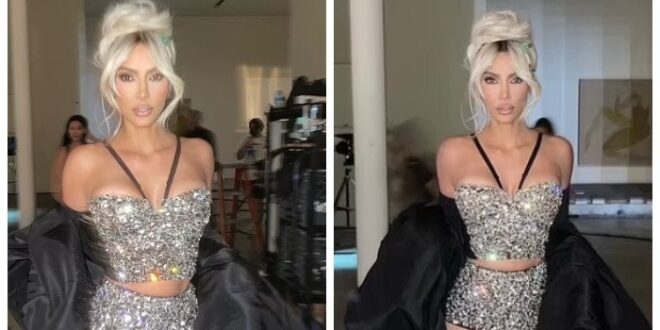 Kim Kardashian dropped jaws with her latest sizzling pictures in a rhinestone halter top on her social media.

On Tuesday, the 41-year-old reality star posted some sensational visuals to her social media, looking amazing in a revealing halter top.

The mother-of-four gave her petite frame a boost by slipping her feet into a pair of classic black heels.

Kardashian achieved a sultry stare by wearing the incredible getup as she styled her blonde hair into a voluminous updo with her curtain bangs left out and curled to frame her face.

Meanwhile, her ex-boyfriend hit the red carpet for the first time since his split from the reality TV star.

The comic, 28, looked dapper as ever as he stepped out for a premiere of his new romantic comedy, Meet Cute, in New York alongside his co-star Kaley Cuoco and looked as happy as possible.

Despite having a strong relationship with the former Saturday Night Live star, the Skims founder now knows that her feelings were not driven by “love” as it “takes time.”

An insider told Hollywood Life that The Kardashians star does not have the time to invest in a relationship and the star’s just looking to have some fun, which may be the reason she parted ways with Davidson.