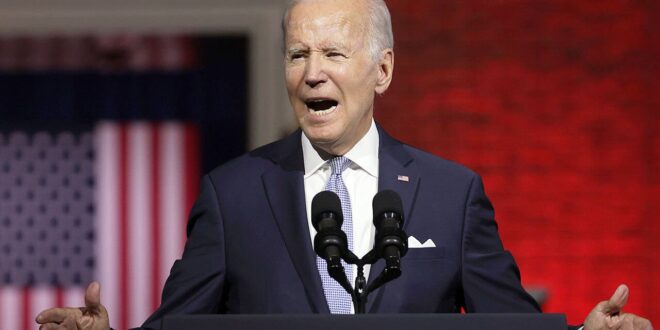 During Biden’s remarks Thursday: “And here, in my view, is what is true: MAGA Republicans do not respect the Constitution. They do not believe in the rule of law. They do not recognize the will of the people. They refused to acknowledge a free election.” About 74 million Americans voted for former President Donald Trump and the Make American Great Again” (MAGA) movement in the 2020 presidential election.

Biden’s speech, which was broadcasted live on several new outlets, was solely focused on MAGA Republicans, with no comments being made on the economy, rising inflation, the fentanyl crisis, or abortion.

Trump-endorsed candidate Blake Masters fired back at Biden after his comments that targeted MAGA Republicans. Masters is taking on Sen. Mark Kelly in the Arizona Senate race this fall.

BIDEN SLAMMED BY VETERANS GROUP FOR USING MARINES ‘AS PROPS’ IN PARTISAN SPEECH: IT ‘ERODES TRUST’ IN MILITARY

“During a time when we desperately need to bring people together, not further divide, Biden declares Republicans as enemies of the state and purposely inflames tensions. Never before has an American leader caused so much damage while accepting so little responsibility: Biden’s speech was a direct assault on the very people he is supposed to serve.”

U.S. President Joe Biden delivered a speech at Independence National Historical Park September 1, 2022 in Philadelphia, Pennsylvania, for “the continued battle for the Soul of the Nation.”
(Alex Wong)

Sen. Marco Rubio, R-Fla., seeking reelection this fall, also made a post, “Angry man smears half of the people of the country he is supposed to lead & promised to unite.” 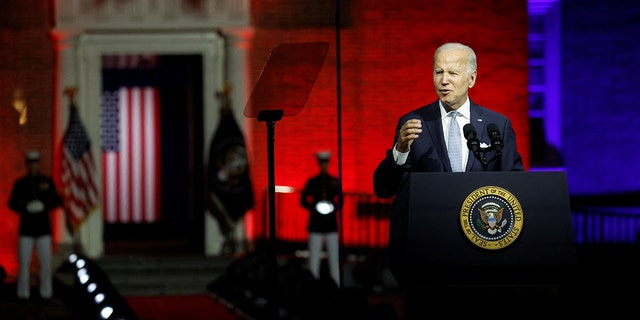 U.S. President Joe Biden, protected by bulletproof glass, delivered remarks on what he calls the “continued battle for the Soul of the Nation.”
(Jonathan Ernst)

Thursday, Fox News Digital asked twenty-one vulnerable House Democrats if they agreed with President Biden that MAGA Republicans are a “threat” to the democracy. None of them responded.

Following Biden’s speech, Rep. Dina Titus, D-Nev., joined the president in his efforts posting on her Twitter account: “If MAGA Republicans take control, they will overturn every election with a result they don’t like.”

During a recent campaign rally in Maryland, Biden compared the philosophy of MAGA Republicans to “semi-fascism.”

“What we’re seeing now is either the beginning or the death knell of extreme MAGA philosophy,” Biden continued, “It’s not just Trump, it’s the entire philosophy that underpins the — I’m going to say something, it’s like semi-fascism,” Biden said in his speech.