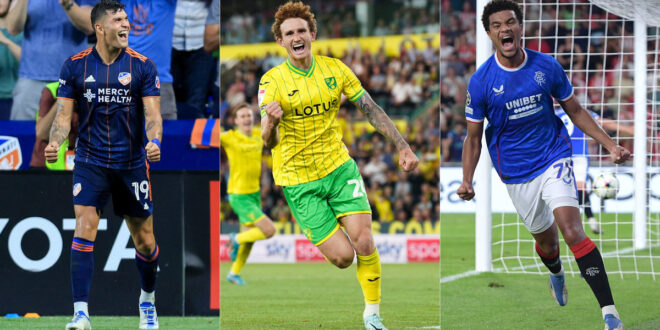 One of the last remaining pre–World Cup questions for the U.S. men’s national team was answered Thursday. Come Nov. 9, the projections can stop and the scrutinizing of club appearances can be temporarily put to rest. On that day, in New York City, manager Gregg Berhalter will reveal the U.S.’s 26-man roster that’ll be headed to Qatar, and, barring any injury setbacks at the club level in the remaining days before players are officially released to their national teams, that’s who will represent the country at the World Cup.

But there’s still a bit to go before that checkpoint is hit. A month from Saturday, the final pre-roster-reveal camp will conclude after a week in Germany and Spain, where the U.S. will face Japan and Saudi Arabia in its last tune-ups before the World Cup. Those matches also double as the final auditions for players on the roster bubble, with Berhalter’s task to balance preparations for World Cup group games against Wales, England and Iran with assessing his player pool in person for one last time and using what he observes to assist in making his last cut. He has typically capped U.S. camps at about 27 to 28 players, with his feeling being that a group too big is ultimately a disservice to the players and the overall mission.

That means that if some of the last-chance-saloon players are indeed incorporated next month, some intriguing omissions will have to be made. Not being included in this camp does not mean a player is out of the World Cup picture entirely, but with the opportunities to show out in a U.S. kit (yes, even that leaked one) dwindling, it would put any player excluded for sporting reasons on notice that there’s no margin for error when it comes to form over the subsequent weeks.

With all of that said, here’s one more projection for who could be in frame for the all-important September camp, based on long-standing stature within the player pool and recent club performance:

The goalkeeper picture has played out as expected to start the club season in England. Steffen and Horvath are playing regularly after securing loans from their Premier League parent clubs down a rung to the Championship (although the evidence from the former has not been all that convincing), while Turner has been rooted to the bench as Aaron Ramsdale has backstopped Arsenal to first place in the Premier League through three games. Nevertheless, that’s the top of the pool.

If any MLS keepers make the trip, NYCFC’s Sean Johnson and Chelsea-bound Chicago Fire standout Gaga Slonina would figure to be the ones getting the call.

There aren’t many question marks here, perhaps aside from which club will be employing Dest at the time of this camp, as rumors swirl regarding his Barcelona future. Whether Scally earns one more look, as his club so clearly desires, is another. After an unspectacular June showing with the U.S.—Uruguay especially targeted and exposed him—the 19-year-old has started all three Bundesliga games thus far for Gladbach and offers the kind of versatility at fullback that often translates to rosters in international competition as long as the quality is there to match.

For those holding onto hope that John Brooks would work his way back from exile and into the picture, it’s hard to see that happening. Berhalter had lamented how Brooks was previously playing in a system at Wolfsburg that didn’t operate like the U.S.’s and how that hurt him when he last appeared in U.S. camp, but not only has he not found a club to remedy that, he hasn’t found a club at all. He remains a free agent, and while that could change at any time, the lack of swift resolution can’t possibly work in his favor. It’s looking quite likely that the U.S. center back with the highest potential ceiling and the most previous World Cup experience won’t be in Qatar.

As for those likeliest to be on that path based on Berhalter’s preferences, Zimmerman, Richards and Long seem to be in the lead, while a fourth spot remains less clear. Carter-Vickers has picked up where he left off at Celtic last season, is headed into a Champions League group featuring Real Madrid and is positioned best among the other candidates to get one more look.

This remains a pretty settled group as well, with some of the wingers listed below able to double as central attacking midfield options. The wrinkles are Sands, whose versatility to be able to play both defensive midfield and central defense bodes well for him, and his club teammate Tillman, whose aerial presence and aggressive approach early in his loan stint at Rangers have put him firmly in frame. Roster expansion from 23 to 26 certainly plays to his favor, too.

Cristian Roldan’s groin injury comes at the worst time for a player who figured to be on or near the roster bubble, while de la Torre, who had appeared to raise his stock in the last camp, has played just three minutes in his new club’s first two games. That doesn’t undo all the strides he took in the spring, but it bears monitoring if his playing time doesn’t pick up over the next couple months.

This area of the field above all others is where Berhalter will have to decide how far he wants to expand the pool to get a glimpse at those making a late charge vs. how much he wants to work with the players he has gotten to know quite well over the last four years. He clearly rates the likes of Paul Arriola and Jordan Morris, who could still find themselves in Qatar, but a camp squad with 12 or so forwards would be an awfully lopsided one.

It would be difficult to justify Ricardo Pepi’s inclusion, as harsh as that may be on a player who was vital to getting the qualifying effort back on track last fall. But history is littered with players who have done some heavy lifting in qualifying only to miss out on the World Cup itself, and his $20 million move to Augsburg simply hasn’t worked out. He has gone goalless for club and country since the U.S.’s World Cup qualifying win over Jamaica last October, and there’s not enough goodwill from the fall built up to offset that. Another one who can be ruled out is Daryl Dike, whose thigh injury removes him from roster contention and punts his World Cup dreams four years down the road.

As for those included here, there are the Europe-based locks like Aaronson, Pulisic, Reyna and Weah (although the latter is nursing a foot injury, and if it lingers, he could be forced to miss out), and the in-form Ferreira, whose lasting impression from the most recent camp was a four-goal showing (albeit against lowly Grenada).

Then there are the hard-chargers. Pefok, Sargent and Wright have all gotten off to strong starts to their club seasons. Pefok’s transition from the Swiss league to the Bundesliga has been rather seamless, and he has three goals in four games in all competitions. Sargent, meanwhile, has scored three goals in his last two games for Norwich, finally getting a chance to operate as a central striker and making the most of it. Wright now has five goals in his last three games after his double on Friday, performing well again at Antalyaspor, and although he didn’t fully impress Berhalter in June, it’s hard to argue against his inclusion next month.

Vázquez is the real wild card, with his scorching scoring form in MLS (15 goals total, same as Ferreira; seven in his last eight games) demanding that he get a look. It already earned him an All-Star nod and contract extension with FC Cincinnati, and with the U.S. looking to exhaust its options at a position that has lacked a clear answer for the duration of this cycle, one would think that Vázquez has earned his shot.

Previous Support for legal abortion grew after Dobbs ruling, which could affect midterm election turnout: WSJ Poll
Next Miley Cyrus and her dad are upset with each other, claims source