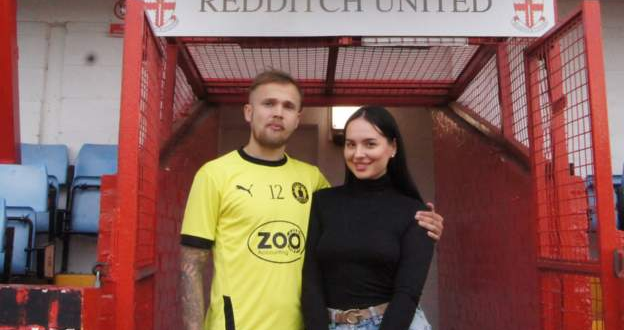 Yan Osadchyi had no plans to appear in this season’s FA Cup and in many ways he wishes he was not preparing to play for non-league Redditch United in the first qualifying round this weekend.

In February, Yan was making a good living playing in defence for FC Alians Lypova Dolyna in the Persha Liha, the second tier of football in Ukraine.

Then came the war and he has quickly gone from challenging for promotion to the Ukrainian Premier League to being a refugee living in Droitwich, Worcestershire, with his girlfriend, Alina Shtyl, about 2,000 miles from the home they shared in Sumy, north-east Ukraine.

Russia’s invasion turned Yan and Alina’s lives upside down. But it is not all grim.

The couple have settled in their new surroundings in Worcestershire and Yan has found a new club, Redditch United, who play in the seventh tier of English football.

Fans of the part-time club have warmly welcomed Yan and Alina, and the national flag of Ukraine has been on show at home and away matches this season.

It is likely to be on display again when Redditch make the 30-mile journey to Rushall Olympic, near Walsall, in the FA Cup on Saturday.

“Not long ago a bomb hit my old school which is 100m away from my parents house in Kharkiv,” Yan, 28, tells BBC Sport.

‘My uncle is fighting in Ukraine’

Yan was away with his team on the Turkish Riviera for warm-weather training when his mobile rang early on 24 February.

His parents, Sergey and Natalia, were phoning with the grim news that the Russian invasion was under way and it was not safe to return to Ukraine.

“They were very upset,” he says. “I’d been in Turkey five or six days when the news came. The city where my parents live was under attack. I grew up in Kharkiv and it was being bombed. I was shocked.”

Stranded in Turkey with no prospect of getting home, the next few days for Yan were all about trying to find somewhere safe where Alina could join him.

Russian forces were attacking Sumy, where Alina had remained while Yan was away. She managed to escape after a perilous journey across Ukraine, but it would be several days before they were reunited again in Budapest, Hungary.

The couple then spent a month in Austria as they waited for a visa before eventually arriving in England. While the last few months have been traumatic, they consider themselves fortunate.

“One of my team-mates managed to make it back into Ukraine to fight. I keep in touch with him and he is ok,” adds Yan. “I have a grandfather and an uncle still living in Ukraine. My uncle is fighting. He is near the front line. I last spoke to him two weeks ago.”

While Yan’s father is in the United States earning money for his family, his mother and younger brother are in Budapest.

“I don’t know, maybe two or three months I hope,” Yan replies when asked when he might see them again.

Picking up the pieces in Worcestershire

Yan first met Alina in Sumy where she was an English tutor. “Yan was my student,” she says.

“We’re together, so we can support one another. It would have been very hard had either of us been in England alone.”

The Hartley family from Droitwich have been the perfect host family to the couple and helped Alina find a job at Wychavon District Council in Pershore.

“It is definitely a cultural change living in Worcestershire,” says Alina. “I used to live in the centre of a city and now I live in a rural area. Our hosts are very nice people and they are helping us adapt.

“When Yan is not playing football, he goes to the gym. In Ukraine he used to train every day. He keeps in touch with former team-mates. The Ukrainian Premier League has just started again and some of the guys from his team have returned to play in the Premier League.”

As a young player, Yan was in the academy at Metalist Kharkiv, who reached the quarter-finals of the Europa League in 2011-12.

FC Alians were only founded in 2016 and took the name of Lypova Dolyna because the club’s president wanted his village to be recognised.

However, the team played in the city of Sumy, a 90-minute drive from Lypova Dolyna.

“Technically you can see that he has played at a much higher level,” Matt Clarke, manager of Redditch United, 11th in the Southern League Premier Division Central, tells BBC Sport.

“I knew about Yan in mid-July. An agent contacted me to say he had heard there was a Ukrainian player looking for a club.

“He’d been training at another club over here and it didn’t quite work out for him. I had a look at some clips of him, got a bit more information, and invited him in.

“If there is an opportunity for him to go to a full-time club, I have already promised Yan I will drive him there because I think it would be such a great story for him to return to full-time football.

“He’s a fantastic bloke. He’s been through some unbelievable life-changing events.

“I’ve spent quite a bit of time with him and he’s told me some of the events that have gone on like his family house is no longer there because a bomb wiped it out.

“Fortunately he is over here with his partner and he has got football as an outlet.”

Yan and Alina hope to return to Ukraine one day but for now they are making the most of their time in Worcestershire.

“I watch the news every hour for updates on the situation back home because it is really important to me,” says Yan.

Meanwhile, Alina has become a regular at Redditch matches.

“I always go to watch Yan,” she adds. “We’ve both noticed the flag of Ukraine at matches. This is so kind.”

Previous Feist pulls out of Arcade Fire tour, citing allegations against frontman Win Butler
Next US Treasury says request for Hunter Biden records must come from Dem-led committee, not Republicans