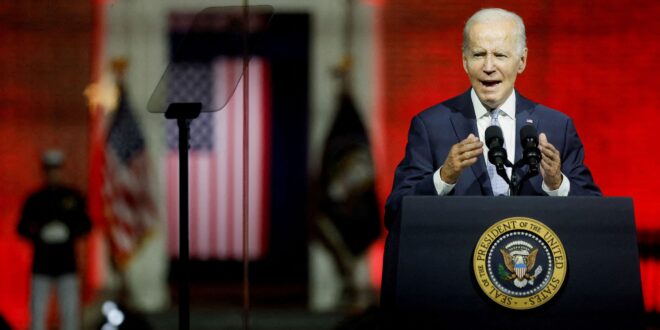 Democrats are tactically ‘ignoring’ the rule of the law: Rep. Byron Donalds

During an interview on “Fox & Friends Weekend,” Saturday, Rep. Byron Donalds, R-Fla., denounced President Biden for his divisive speech on Thursday evening, arguing that it is “incumbent” for Republicans to fight for the “soul” of America this November.

REP. BYRON DONALDS: He’s only doing this because he knows he did a terrible, stupid thing. That speech was dumb. They shouldn’t have ever done it. The imagery was bad, but the words and the destruction to the country was far worse. Look, somebody should remind Joe Biden that the issue he has right now with his approval numbers is that you have Independents and also some Democrats who don’t agree with how he’s doing his job. This president has ignored the rule of law at the southern border. This president is forgiving anywhere from $300 billion to $1 trillion in student loans where he has no legal authority to do this. This president signed off on an Inflation Reduction Act where he and his party lied because it’s really about the Green New Deal and climate change.

U.S. President Joe Biden delivers remarks on what he calls the “continued battle for the Soul of the Nation” in front of Independence Hall at Independence National Historical Park, Philadelphia, U.S., September 1, 2022.
(REUTERS/Jonathan Ernst TPX IMAGES OF THE DAY/File Photo)

But they couldn’t get that through if they told the truth, so they lied to the American people. Those are threats to the democracy as well. But last thing for Joe Biden. It’s incumbent now for Republicans, whether you’re a MAGA Republican, mainstream Republican, whatever the classifications are, or frankly, any American to actually fight for the soul of America. It’s a fight for the soul of the republic, because we do not believe in just ignoring the rule of law when it suits your interests. And we definitely don’t believe in either packing or unwinding the Supreme Court because we did not get our way. That’s what Joe Biden believes. That’s what Raphael Warnock believes. That’s what Katherine Masto in Nevada believes. Mark Kelly in Arizona believes. Maggie Hassan in New Hampshire believes. They believe that stuff. They will vote for that stuff. They will do that stuff.

Previous What to watch and stream on Labor Day 2022
Next Tottenham 2-1 Fulham: Antonio Conte not worried about goalless Son Heung-min