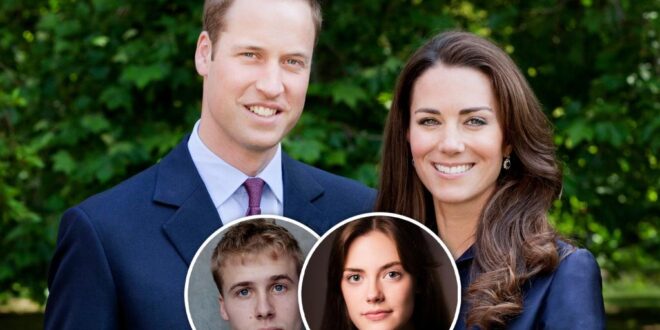 The final season premiere of “The Crown” may be far off, but viewers now know who will play Prince William and his wife, Kate Middleton, in their younger years.

Rufus Kampa, 16, will play William, now 40, from the age of 15, while actor Ed McVey, 21, will play him during his late teens and into his early 20s, Deadline reported on Friday.

As for Middleton, also 40, Meg Bellamy will portray her as a young woman.

Season 5 is set to drop on Netflix this November with new actors taking over the roles of the royal family as they age. Season 6 won’t be released on the streamer until 2023.

The upcoming season will show Princess Diana, Prince Charles and the rest of “the Firm” as they deal with the issues that befall them in the 1990s, while Season 6 will move into modern times, chronicling the conflicts they encounter in the 21st century.

Kampa is set to appear in episodes showing how the family handled the deaths of Princess Diana and her boyfriend, Dodi Fayed, in a fiery car crash in August 1997. This week marked the 25th anniversary of the devastating event, which was remembered in an outpouring of emotional tributes.

McVey and Bellamy’s story arcs will include how Wills and Kate first met when they were both studying at the University of St Andrews in Scotland back in 2001. The lovebirds didn’t marry until April 2011.

Last month, the website Casting Talent was looking for a young star between the ages of 18 and 35 to be cast in the role of William.

“This is a significant role in this award-winning drama, and we are looking for a strong physical resemblance,” the advertisement explained, adding that no previous acting experience was needed.

In April, Netflix posted an ad for someone to play the Duchess of Cambridge. Filming for Season 6 will reportedly begin later this fall and the show will mark the professional TV acting debuts of Bellamy, McVey and Kampa.

Kampa and Bellamy both scored their roles by sending in audition tapes after learning of a casting call on social media.