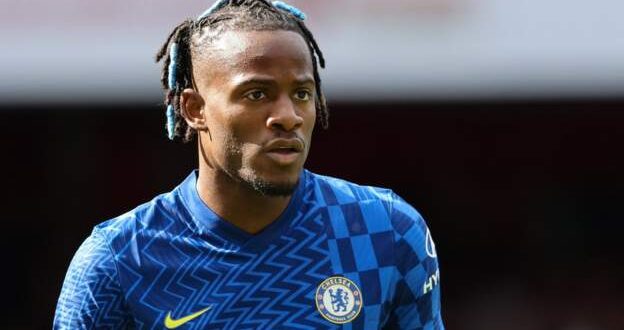 Nottingham Forest have broken the British record for most signings in a single season after an unprecedented summer of transfers.

The newly promoted Premier League side have brought in 21 players during the summer window.

Forest broke the record despite a deal to make Chelsea striker Michy Batshuayi their 22nd signing falling through.

Belgium striker Batshuayi had looked set to move from Chelsea, but a deal could not be reached.

The 28-year-old, who joined the Blues in 2016 and has had five loan spells, is out of contract at the end of the season.

Nevertheless, Forest have surpassed the previous British record for most transfers in a single window, held jointly by Livingston in summer 2001 and Dundee United in 2000 on 19 signings, according to football website Transfermarkt.

The English record was previously held by Crystal Palace in the summer of 2013, with 17 signings.

Why have Forest signed so many players?

Forest have spent big on several players including attacking midfielder Morgan Gibbs-White from Wolves for £25m, striker Taiwo Awoniyi from Union Berlin and defender Neco Williams from Liverpool for £18m apiece, and forward Emmanuel Dennis from Watford for £13m.

They have also brought in midfielder Orel Mangala and centre back Moussa Niakhate from Bundesliga clubs Stuttgart and Mainz respectively, along with right-back Giulian Biancone and central midfielder Remo Freuler.

Forest have remarkably brought in three left-backs – Renan Lodi on loan from Atletico Madrid, plus Omar Richards from Bayern Munich and Harry Toffolo from Huddersfield. They also signed central midfielder Lewis O’Brien from the Championship side.

Brandon Aguilera and Hwang Ui-jo were also signed permanently but immediately sent on loan, to LD Alajuelense and Olympiakos respectively.

While Forest have caught the eye with so many signings, manager Steve Cooper needed to strengthen the squad to compete in the Premier League, having also lost several men key from their Championship promotion last season.

Loanees Djed Spence, James Garner, Philip Zinckernagel, Max Lowe and Keinan Davis – all part of the team which won promotion via the play-offs – have either returned to their parent clubs or joined rivals.

The left-footed centre-back, who can play in a back three or four, has signed a two-year deal.

Boly, 31, failed to turn up for Wolves’ game against Newcastle on Sunday, despite being included in the matchday squad, as he pushed for the move to the City Ground.

“I’m very excited to have a new adventure with this club,” said Boly.

“I spoke to Morgan Gibbs-White [former team-mate at Wolves] before I came and I’d seen the spirit of the team and he said I’d love it because it is a big club – the fans and everyone wants to go in the same direction.

“I watched the game against Tottenham and the spirit of the team really impressed me. I was listening to the fans in that game and they were unbelievable.”

Forest, who are playing in the Premier League for the first time in 23 years, have taken four points from their first five games, but were thrashed 6-0 at Manchester City on Wednesday night.

The result means they have conceded 11 goals so far and Cooper wanted further defensive reinforcements.

Boly will be available for Forest’s game against fellow newly promoted side Bournemouth on Saturday (15:00 BST).

The record setting 20th signing was Blackpool winger Josh Bowler, in a deal believed to be worth about £4m.

The 23-year-old, who scored two goals in seven Championship games this season, has immediately been loaned to Olympiakos for the season.

Last but not least, arrival number 21 was Rennes defender Loic Bade on loan, with an option for a permanent deal.

‘Forest will be seriously scaring people’

It has been a busy summer for Cooper’s side with a complete rebuild of the squad who earned promotion being undertaken.

“Forest will be fine that is for sure. They have done fantastic business. Sometimes you can buy too many players but Forest have brought in the right players,” said Former Crystal Palace striker Clinton Morrison.

Ex-Liverpool defender Jamie Carragher said strengthening in the market “does not guarantee anything” but there will be a “real fear for other clubs”.

“Forest are bringing players off the bench who cost £40m – they have real strength in depth and it will be a big worry for teams who expect promoted teams to go down.

“I think Forest will be seriously scaring people.”

Former Forest striker Robert Earnshaw added: “They needed to build a squad that represents them in the Premier League. I think they are doing it right. Will they stay up? I think so.”